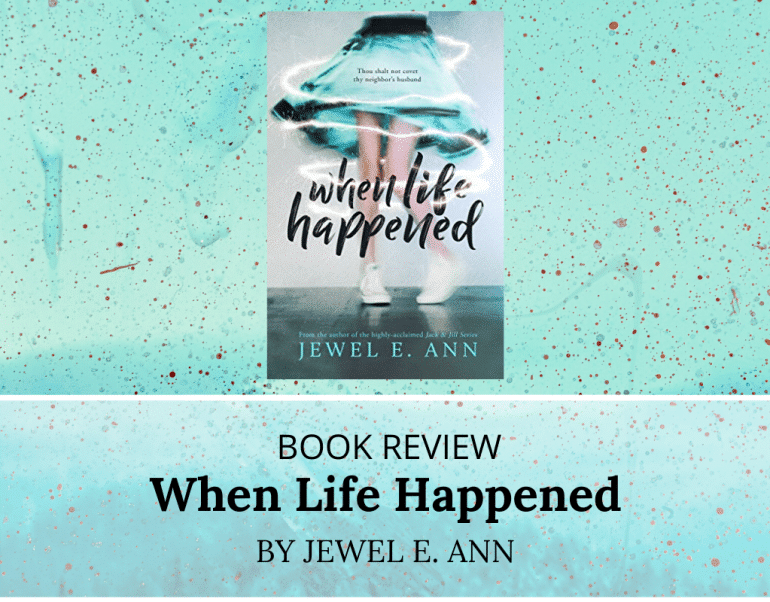 Review of When Life Happened by Jewel E. Ann

“When life happened, it did it in a heartbeat. That space between time. A first inhale, a last exhale. The dawn of realization, the eve of what was and never again would be.” ~ Jewel E. Ann

PART I: NO SPOILERS

I went into When Life Happened knowing nothing. After reading the entire book, do I wish I knew about the twist prior to reading it? No, I don’t think so. It certainly wouldn’t have been as impactful or shocking. I mean, I never saw it coming. Oh and for the record, I will not mention said event in this part of the review because it is the no-spoilers review.

Emotionally, I did not fare well. I went from having mixed feelings about August and Parker to falling in love and rooting for them to get their happy ending. I was midway through their story when I was hit with the biggest freaking twist that completely out of left field. To say I was surprised would be an understatement. I reread that one page maybe three or four times and then I just stared at my laptop in horror. Jewel E. Ann did the unthinkable and, accordingly, I was a bit mad. Actually, before the anger set in, I was in denial. I thought it was a mean prank. Well, you can guess that the twist was not, in fact, a prank. It is the real deal.

“It’s hard to love someone when they reject your love. It’s hard to fight when they won’t speak. And it’s even harder to make up when you don’t even know what you’re fighting for.” ~ Jewel E. Ann

Before I move onto the second part of this review, I need to say a few things:

Holy moly! What the hell did I just read? I never saw it coming. How did that even happen. Jewel E. Ann put me through the wringer with that stupid twist. I mean, how could you not fall for Gus. He was such a good guy. Ugh!  Of course, I don’t condone cheating, but there is a grey area and there was a hella lot of that between Gus and Sabrina.

Here’s the thing though… I felt robbed of my catharsis regarding Gus and Parker. It never happened. To make matters worse, we never found out why Gus and Sabrina were in the car. Did Sabrina tell Gus about her infidelity? Did Gus ever reveal what was happening between him and Parker to Sabrina? These are the questions I want answers to, but I’ll never get them because Gus and Sabrina are dead! I just want to know! And it’s killing me, people!

When I found out they died, I thought it was a joke. Like, what? Our hero dies…halfway through the story. Um, that was not supposed to be in the forecast. Gus…oh Gus. It’s not fair. That felt too much like life. How someone can be there one second and bam! Gone the next. How am I supposed to cope? I couldn’t even shed a tear because I never reached the acceptance stage of grief. Now that I think about it, the only books I have cried for were ones where I knew someone was going to die (from the start). This though, no clue.

Then Levi, Sabrina’s brother, came into the mix. And Jewel E. Ann did it again. I fell for Levi. No Lie Levi. That moment when Parker asked what his favorite workout was and he (eventually) replied, “Sex.” Well, call me the OMG Cat because I was gobsmacked. Who divulges that on the second meet-and-greet? Levi, that’s who. Because he can’t lie for shit. He managed to burrow under my skin even though he wasn’t the original hero. But really, I don’t think I have ever read a book where the author kills off the hero halfway through the book. Especially when it’s a complete freak accident.

Well, it’s been about 9 hours since I finished the book. I thought I would be thinking about Gus’s death less by now, but it’s still on my mind. Torture, I tell you. Torture! How did this happen? I’m at a complete loss.

Still, I am happy Parker and Levi met. Even though it was under such unfortunate circumstances. This love story is unlike any I have read before. And I am still at a loss. Alas, I must go before my brain combusts under the weight of When Life Happened.

“Love is stupid. So I don’t care if it’s love. You’re the best part of every damn day. You’re sunshine, and laughter, and the fucking oxygen in my lungs. If this life is a game, you make me want to play it forever, be damned who wins or loses.” ~ Jewel E. Ann