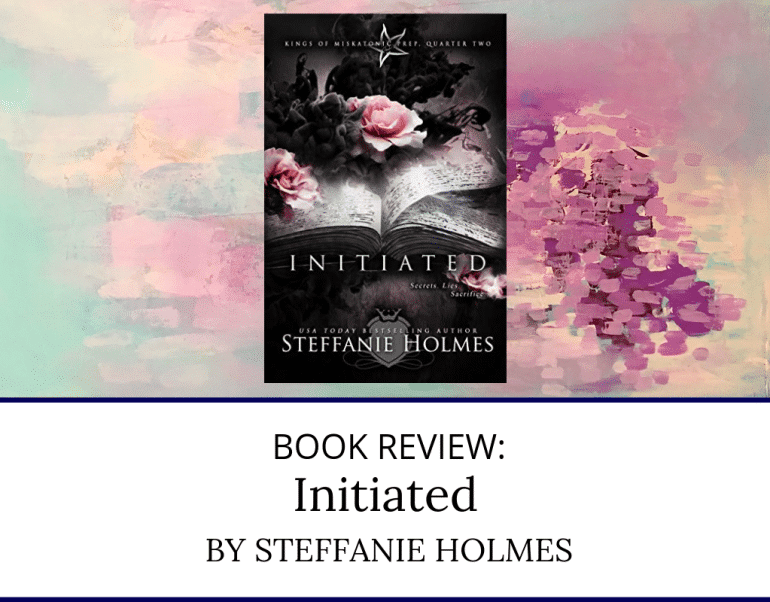 Review of Initiated by Steffanie Holmes

Oh my freaking…I cannot believe this! I don’t think I’ll make it till October 14th. I love this series and I just started it yesterday. I’m obsessed. Obsessed I tell you! I need to know what’s going to happen with Hazel and everyone else.

Seriously, how am I supposed to take that ending? It makes no sense. I highly doubt everything was a figment of her imagination. Come on. Ugh. I love a good cliffhanger until I realize the next book won’t be out for a couple of months. That’s the real kicker.

Initiated focuses on Hazel and the three kings as the struggle to figure out what’s really beneath the school and how to destroy it. However, with the likes of Courtney, the headmaster and all those rotten excuses for parents, it’s kinda hard to figure out the secrets hiding in those caves. There were a few moments when I was this close to disrupting the fabric of our world by jumping in there and shaking a few people around. If only I could’ve done that.

Now let’s talk about the characters. I have a lot to say. And I mean, a lot.

Let’s discuss Hazel (aka Hazey). Hazel’s personality is such a refreshing change to the usual heroines we see in the reverse harem genre. It felt more realistic to me.

Instead of falling for her three tormentors as soon as they started showing her acts of kindness, she kept them at arms length. She trusts Quinn, Trey and Ayaz about as far as she can throw them. However, as time passes, they do show her that they can be trusted which makes the relationship progression more realistic. Slow-burn all the way people. It’s so slow-burn that you should not not expect any action until Initiated.

Another characteristic of Hazel that I like is her ‘take-no-shit’ attitude. One thing I hate is when people just take people’s shit without giving anything back (although I think that kinda makes me a hypocrite because I don’t always give much back).

Of course there were a few pranks that could have had some disastrous results but what do you expect when you have peers literally pouring tar into her hair and destroying her personal possessions? I guess she could take the high road, but that would be an incredibly high road.

Now, it’s time we talk about the kings: Trey, Quinn and Ayaz.

Trey is…complicated. He doesn’t give much away about himself. In my opinion, he was one of Hazel’s worst tormentors. That in itself would make you think he couldn’t be redeemed, but, well, things change. Also, out of the three, Trey is definitely the leader although that doesn’t mean he’s not a pawn. In fact, every one of them is a pawn.

Quinn is a laidback jokester who is an absolute flirt. I know that Quinn is just a flirt in general, but he’s such a sweet one when he’s not being a bully. There were a few moments where Quinn managed to snag multiple smiles from me. He’s that good. Ugh, he’s awesome (except during that first quarter of school).

All in all, I like these three guys and I’m worried about them. I’m not sure what happened, but I swear that headmistress has something to do with it. I won’t say what, but it’s not looking good.

Ugh, I cannot wait to see what happens in the next installment. I do think that Ayaz was either under that god’s mind control or faking it. The first option is not good, not good at all. The latter should yield a much better outcome as we can expect them to plan Hazel’s asylum “prison” escape.

However, I swear, if he was being truthful at the end and meant what he said, I will be piping mad. I might even punch my phone. I simply cannot believe that everything was a hallucination. Unless Steffanie Holmes decided to create the mind-fuck of all mind-fucks. That would be awful, yet brilliant.

If you loved the reverse-harem trope, I definitely recommend trying out The Secret Girl by C.M. Stunich which has all that plus some mystery and intrigue. You can check out my review of that here.