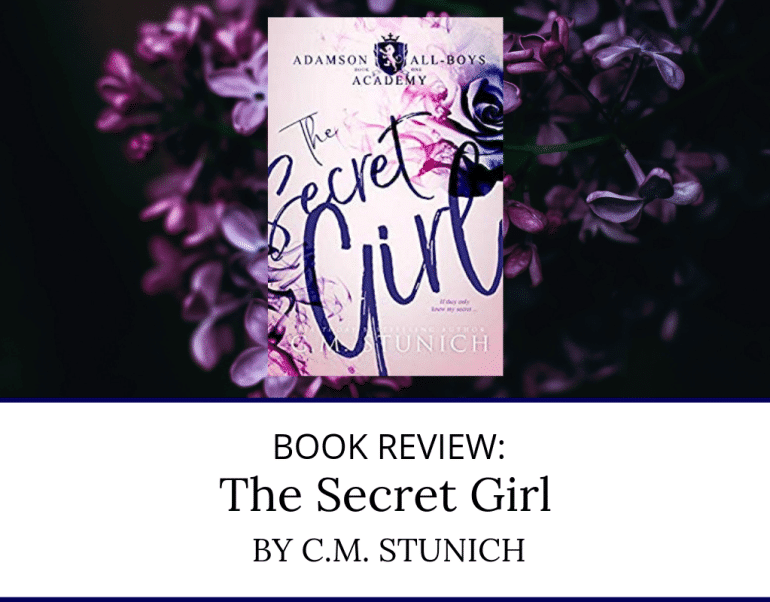 Review of The Secret Girl by C.M. Stunich

I really liked this. I’ll write a review after I sleep.

I’m not usually a huge fan of books where the main character pretends to be someone they’re not. However, in the case of The Secret Girl, all my previous opinions flew out the window. Color me surprised.

Charlotte Carson is forced to move to Connecticut when her father receives a position as headmaster of Adamson All-Boys Academy. The board plans to modernize the academy by allowing girls in and they want to use Charlotte as the guinea pig. However, who wants to be the only girl at an all-boys school? Well, I guess some people would like that, but Charlotte would prefer not to be the only girl. We can all guess what that means.

Enter, Charlie “Chuck” Carson (aka: Charlotte). Chuck is the new guy at Adamson All-Boys Academy and he quickly becomes a social pariah. The question is, how quickly will it be before someone realizes Chuck is actually Charlotte? Well, not too long my peeps. In fact, there’s a killer on the lose and he (or she) is not happy about a girl enrolled at Adamson All-Boys Academy.

I need a moment.

Guys, I did not realize the sequel was not out yet when I read this. If I had known, well, I would have probably still read it, so I would be in the same position. The sequel, The Ruthless Boys, is supposed to be out any day (which is killing me as there is not a specific date). The suspense is ripping me apart.

Now, let’s get into the story. I wholeheartedly recommend The Secret Girl if you’re a fan of mystery with a dash of romance.

This is labeled as a reverse harem romance, but it’s very light. That may change for the sequel (I think it will), as the main guys now all know she’s a girl so we shall see.

The guys to know include Church, Ranger, Tobias, and Micah.

Church is the all-American class president prone to disturbing displays of friendliness (ie, “the smile”). You’ll know what I mean when you read it.

Ranger is the resident chef who enjoys ooking naked. He also happens to be the brother of the first girl who attended Adamson All-Boys Academy who also happened to kill herself months after joining.

Tobias and Micah are the twins and they literally share everything. I mean it when I say everything. Micah and Tobias are honestly my favorite guys at the moment and I cannot wait to read more of them!

There is also Spencer and he made me laugh so many times. See, he feels some sexual tension/chemistry between himself and Chuck, but he’s always liked girls. Don’t count on that to stop him from going after what he wants though.

Read The Secret Girl if you enjoy mystery, romance, four cute guys, some questionable situations, a killer on the loose and a girl pretending to be a guy.

What can possibly go wrong?!

If You Liked The Secret Girl, Try…