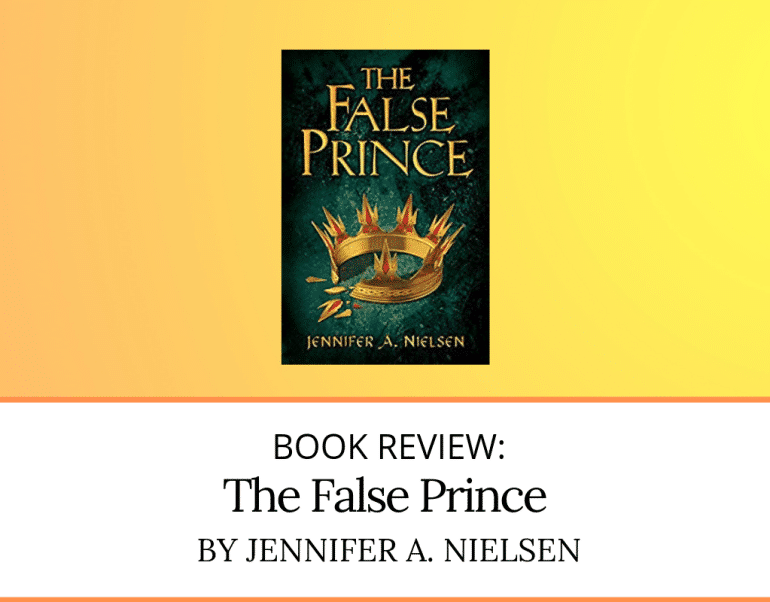 Review of The False Prince by Jennifer A. Nelsen

I have to say, I freaking loved The False Prince! It was fantastic! I LOVE SAGE!!! HEAR ME, HEAR ME!

Gosh, I am so happy I finally read this. It’s been on my to be read shelf forever.

So, obviously this book is about the false prince. Connor (I could care less about his last name) is a nobleman who has a low status within the royal court. He plots a scheme that involves finding an orphan boy who he can train to become the lost prince Joran. The same prince who disappeared four years prior after an impromptu pirate attack (when is a pirate attack ever not impromptu?) during a voyage. Many people believed him to be dead; others carried hope.

The way Connor saw it — how hard can it be to fool the kingdom with an imposter as the prince? Haha. Connor, you sniveling little cockroach. I have a special place in Tartarus for you.

Connor pits the three boys against each other as they all compete for highest prize; becoming prince of Carthya. There’s a lot of backstabbing (quite literally), sabotage, espionage, deceit, lies, and a hell of a lot of gameplays that are downright devious. It’s such an exciting book!

Of course, Connor sucks. He really sucks. I mean, who gets mad enough to torture a kid over a piece of fake gold? Makes no sense. No sense at all.

Now, let me have the honor of mentioning Sage.

AKA: the best pick pocketing scoundrel I have ever met (via words of course).

From the beginning, Sage immediately came off as the type of person who lived by his own set of rules. (And trust me when I say he does!)

Honestly, I was going to try to give him a better little blurb, but all I can think about is how much I love him. He’s the best false prince I have had the pleasure of getting to know. From that piece of gold to his ruby bejeweled sword along with that infamous hand trick of his…ugh, you gotta love him.

Also, I must mention his generosity and kindness. He and Imogen are going places, guys. They are. Going. Places. I just have a gut feeling about it (that and the fact that I read the summary for the sequel and accidentally read part of a review…oops.)

Yes, the book itself is very much a slow burn series of events, but it’s absolutely perfect. It makes the ending so much more delightful. Also, about 90% of the story takes place at Connor’s place where each boy vies for the position as prince. The timeframe is 2 weeks, but you should be able to get through it in about 2 hours or so.

There wasn’t much focus or emphasis placed on romance except for some hints and gut instincts here and there. Now, I’m not giving anything away. In fact, I’d say it was quite obvious. Imogen and Sage will definitely end up together. It’s pretty much inevitable.

With that said, I’m expecting some more bouts of romancing going on in the sequel, but I don’t think it will ever be the MAIN focus of the stories. They’re definitely more plot and character-centered rather than the typical romance novel.

If you don’t read this, well, I can’t say much since it took me forever to finally give it a try. What I can say is that I 100% hands down recommend this to everyone who loves stories with high stakes and twists that you may see coming, but won’t understand until it happens.

Plus, who doesn’t love themselves some good, old-fashioned sword fighting and horse riding? Yeah, that’s fight, sword fighting. Exactly like what will be happening in the final season of Game of Thrones.

If you liked The False Prince, read this…

Six of Crows by Leigh Bardugo

If you loved Sage’s sneaky thieving skills, you’ll enjoy Kaz Brekker and his motley crew. Kaz is offered the chance to pull off a dangerous heist and with his crew, he may just be able to do it. That is, if they don’t kill each other first.

Queen of Air and Darkness by Cassandra Clare

You should start with Lady Midnight if you haven’t already read the series, but it’s so worth it. There’s a slow burn romance that is of the taboo kind + action and magic.

For more upcoming fantasy books, check out my post here.