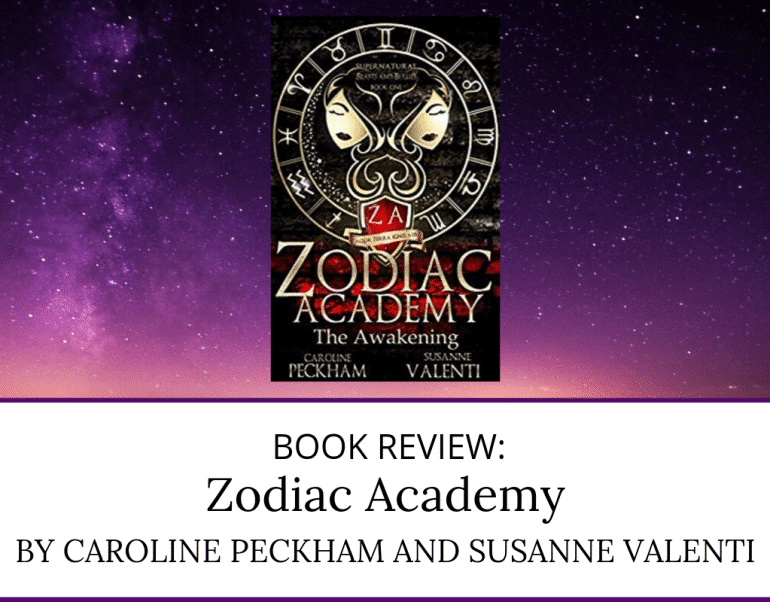 Review of Zodiac Academy by Caroline Peckham and Susanne Valenti

The Zodiac Academy Series features everything from fae to vampires and shapeshifters to mythological creatures to powers over the elements and, of course, long-lost royal twins who have no clue what they’re getting into.

The Vega twins, Tori and Darcy, grew up in foster care in Chicago and have spent most of their lives looking after each other. When they’re going through a rough patch money-wise, they’re offered a chance to attend Zodiac Academy, a school for fae. A place that they never knew even existed. However, once they find out about their inheritance (which they will only receive after graduating from the academy), they jump on the chance.

The Celestial Heirs, on the other hand, have been preparing to take over the throne after the royal family was murdered. When they find out about the Vega twins, however, you can imagine how threatened they are by them as they have blood-ties to the throne. This leads to a lot of bullying. If you’ve ever read any reverse harem books, like The Rich Boys of Burberry Prep, and enjoy that type of plotline (bully-romance), then this series will be right up your ally. However, don’t expect much romance in the first book. Darcy and Tori are not the type to take any shit, so these guys don’t have much of a chance in the short-term.

Let’s do a quick breakdown of everything the Vega twins have going against them: The Celestial Heirs, Orion (at least in the beginning), the harpy things and their overall inexperience with everything magical.

So, there are about 1,000 words between the first and second book and I read them in the span of two days. I could not put them down. The authors writing style(s) really pulled me in and made me root for Darcy and Tory (especially when they were having their vengeance on the Heirs).

Tori Vega is a kickass woman who is not one to back down from a challenge or to be afraid to say what’s on her mind. If there’s one thing that I admire most of Tori is her thick skin. And she definitely needs it with how much shit she (and Darcy) get from the student body at the academy.

Darcy Vega is definitely the type to stand up for herself, but, whereas Tori speaks without thinking, Darcy is the opposite. She is also a bit more trusting of strangers until they give her a reason to do the opposite (like the Heirs). Both sisters are very loyal and stick up for each other no matter the situation.

Alright, so Tori is torn between Darius and Caleb. After learning more about Darius’s home life and meeting his younger brother Xavier, I definitely feel sympathetic towards his situation. However, that does not excuse what he has done. Caleb irritates me at times. I don’t know why. Well, actually, I do. The fact that he tried to downplay his involvement in the scheme against the twins really annoyed me. He knew it was going to happen. Ugh. I don’t think Max was in the running, but Tori did respond to his siren song so… who knows what that means. I don’t know much about him except for what Tori learned about him during that siren song moment.

Seth is just kind of there now. He really messed up when he did what he did to Darcy. That was some messed up shit. Also, their revenge on Seth is hilarious. It made me laugh a few times. I also really enjoyed what they did to Caleb. Especially when they put that blow-up pegasus sex doll into his room. You just knew where that was going.

Now, Darcy is the one who is in the forbidden teacher/student romance. Lance Orion, commonly referred to as Orion, is a professor at Zodiac Academy and an overall asshole. He’s a prickly guy with a bit of a mean-streak. However, come book two and you start seeing a change in his behavior towards Darcy. In fact, he went as far as to walk Darcy to her class because of the attacks on campus. This is definitely slow-burn, so don’t expect much to happen in the first two books.

If you’re in the mood for a bully-romance and a forbidden teacher-student romance then I think you should give this a go. Especially if you’re into the whole paranormal academy trope. One thing to know is that this is not reverse-harem. I went into the series thinking there were going to be some interesting situations (harem-wise), but, alas, that was not the case. There are definitely a few different romances that could evolve Tory’s way, but I think it will be monogamous.

One last thing: I cannot wait for the third book in this series! It comes out in November, so if you’re someone who prefers to read an entire series in one sitting, then you won’t have to wait too long.

Book One: The Awakening