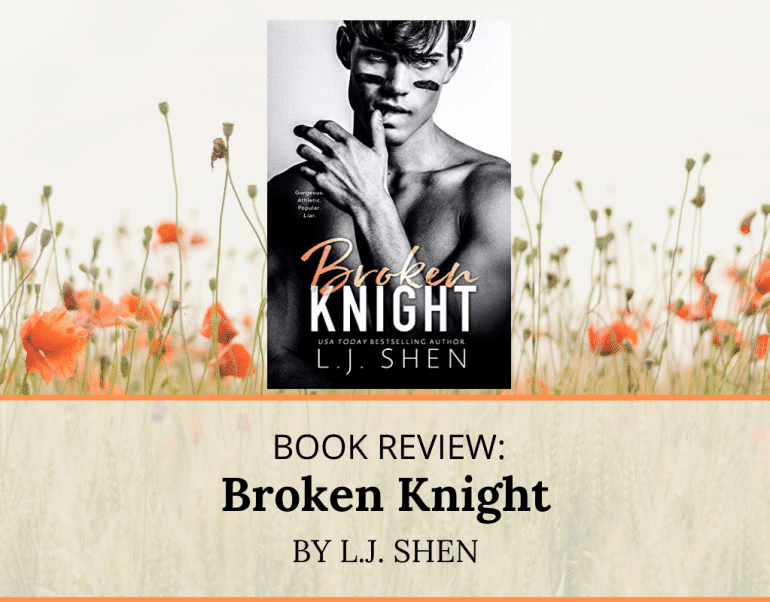 “Life is like a book, a long chain of scenes threaded together by circumstances and fate. You never know how thick or thin your book is, so you better make the most out of every scene, enjoy each chapter.” – L.J. Shen

I planned to read Broken Knight on the day of its release. That did not happen. In fact, I pushed it off until yesterday, four months later. It took me a bit of time to open this gem and, boy, I had no clue what I had been missing out on for all those months. Broken Knight is definitely going down as one of my favorite books of 2020.

Everything is artfully constructed: from the beautiful prose to the truly remarkable characters that captivate you with their words, their actions, their mistakes, and everything else. Cracks run beneath the surface, and with every obstacle that blocks them from the truth, those chinks in their armour evolve into caverns and wide fissures until the armour eventually deteriorates, leaving them bare, broken and stronger for that. It is a genuinely beautiful story and I cannot recommend it enough.

“Moonshine,” he whispered. “You fill up the empty, dark space—like the moon owns the sky. It is quiet. It is bright. It doesn’t need to be a ball of flame to be noticed. It simply exists. It forever glows.” – L.J. Shen

Knight Cole is the golden boy: charismatic, athletic, popular, wealthy, loved, attractive… the list can go on, but those characteristics barely scratch the surface. At a young age, Knight took up the position of Luna Rexroth’s knight. They were a package deal. If you saw one, the other probably was not far behind. Protective, loyal, humourous, possessive, caring, persistent, hopeful, sad, self-destructive, scared, broken: each trait makes up a piece of Knight, some more so than others. When it comes to Luna, Knight’s protective side always shined through the brightest. That is until her decision to attend an out-of-state college came out of left-field and threw him through the wringer. From there, the cracks in the foundation of their friendship becomes much more noticeable, to the point where no amount of concealer or superglue could blur or patch up those gaps.

“Not all love stories are written the same way. Ours had torn chapters, missing paragraphs, and a bittersweet ending.” – L.J. Shen

Luna Rexroth is Knight’s opposite in almost every way: quiet, gentle, charitable, shy, passive, kind. When Luna was (about) two-years-old, her mother left and took Luna’s voice with her. Luna became a selective mute meaning she could technically speak, but she chose not to (although I think it was more or less due to a mental block). For her entire life, Knight acted as a shield between her and the rest of the world which was why it was so important for her to go off on her own. Post-college Luna no longer needed protection. In fact, she became Knight’s shield.

“If you love someone, don’t set them free. Smother the fuck out of them until they realize they have no chance of escaping. Yup. That was the sentiment I was down with, a method I was willing to try.” – L.J. Shen

Quick side note: Vaughn is an (evil) genius, he knew what Knight and Luna needed in order for it to work out between the two, brilliant mastermind he is. I need to mark my calendar for his story because that is going to be one heck of a humorous ride.

The other day, I read a typical angsty romance where guy proposes to girl, girl accepts, girl disappears, reappears years later and you can guess what happens from there. The storyline is nothing new, but it can still be an amazing story. However, it didn’t hit the mark. I felt let down and I was so close to choosing a fantasy book instead of Broken Knight just to spite the angsty romance genre. But then I thought about how much I love L.J. Shen’s writing and gave in to the little devil on my shoulder telling me to read it. I am so happy I listened. I would give that devil a pint of coffee oreo ice cream if I could, but alas, I’m here, telling you completely useless information that you probably don’t care to hear. So let’s get on with the show and discuss our feelings. Well, my feelings (unless you leave a comment, then we can discuss our feelings).

Knight went through a lot of bad stuff. If you read Ruckus, then you know about Rosie LeBlanc and Dean Cole (Knight’s parents). Seeing your mom fade away right before your eyes, knowing there’s nothing you can do about it can make anyone feel weak, depressed, out of control… that’s what happened to Knight. He hid behind a mask of alcohol, drugs and anger which only served to push people away and further his descent into a dark and self-destructive place. Rosie’s lungs worsened throughout the course of the story which truly sucked and you can guess what happens. It really sucked.

All in all, Broken Knight is a spellbinding and tragic story of two friends who needed to grow apart and grow before anything could ever happen between them. Miscommunication and assumptions were their worst enemies which makes Knight and Luna just like (almost) every other couple (in high school).  It’s simply beautiful and I hope you give Knight and Luna a chance. I’m 99 percent sure that you won’t be disappointed.

“There will be no one else, Moonshine. I will never let you get over me.” – L.J. Shen

Side note: If you haven’t read the Sinners of Saint series, I would recommend doing so. It is not necessary, but then you would know all the stories of the parents (and trust me, they are noteworthy). For Broken Knight, the stories to look for include Ruckus and Scandalous. Ruckus follows the story of Rosie LeBlanc and Dean Cole, Knight’s parents, and Scandalous tells Trent and Edie’s story.