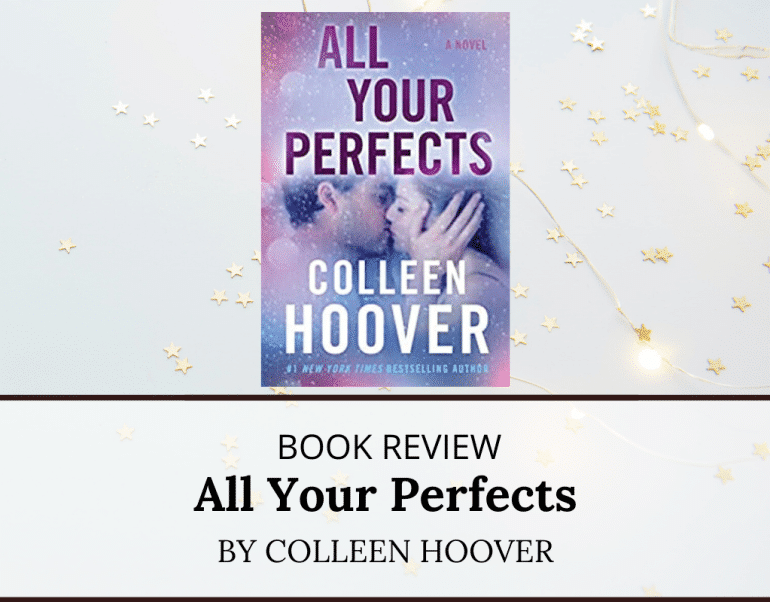 Review of All Your Perfects by Colleen Hoover

“When you meet someone who is good for you, they won’t fill you with insecurities by focusing on your flaws. They’ll fill you with inspiration, because they’ll focus on all the best parts of you.”

Colleen Hoover never fails to amaze me. Her stories always leave me at a loss for words and All Your Perfects did not disappoint. Before I jump into the review, I do have to admit something. All Your Perfects has been on my ‘to-be-read’ shelf for two years now.

To tell you the truth, I’m happy I kept putting it off. I don’t think I would’ve appreciated it as much if I had read it when I first found it on goodreads.

One day, I will have read every single Colleen Hoover book and I will be…hm, what word am I trying to think of? Whatever it is, it matters.

Now, let’s move on to the review.

So what’s All Your Perfects about?

No one ever said marriage was easy and with life’s unexpected turns, you never know what the future has in store for you. Depending on the strength of the storm, it can go one of two ways: the riptide can drag you out to sea or the waves can carry you home. Or maybe you’ll float, simply drifting with the current, close enough to land to see people milling about, but too far to swim back. (This paragraph feels dramatic, I’ll keep it anyway).

For Quinn and Graham, there has been an ever widening divide between the two that shows no sign of shrinking. The two met when they’re lives were falling apart, fell in love and eventually tied the knot. Seven years later and they’re holding their marriage together by threads . . . Threads that are beginning to fray.

Hidden behind Quinn’s forced smiles are feelings of inadequacy, self-loathing and despair. Rather than express those feelings, she keeps them bottled up.

“I miss you, Quinn. So much. You’re right here, but you aren’t. I don’t know where you went or when you left, but I have no idea how to bring you back. I am so alone. We live together. We eat together. We sleep together. But I have never felt more alone in my entire life.”

Unsure of what to do, Graham is at a loss for what he can do to save their marriage. Instead of confronting Quinn, he pretends everything is okay.

As the cracks in their marriage begin to show, they . The question is, will they be able to weather out this storm before their relationship is broken beyond repair?

Buy All Your Perfects

All Your Perfects Review

If you haven’t read All Your Perfects yet and despise spoilers, stop here. Do not read on. It’s riddled with spoilers.

“If you only shine light on your flaws, all your perfects will dim.” – Fortune Cookie

Colleen Hoover knows how to write heavy stories, from It Ends with Us to Verity to Slammed and now All Your Perfects…What can I say, she’s a master of her craft.

All Your Perfects was heavy in a different way though. Quinn was suffocating from the constant cycle and having her hopes dashed every single time. When they drained their savings for the IVF procedures, they’re hopes were dashed once again and when they looked into adopting, the one flaw on Graham’s record led to rejection after rejection.

All of these moments cumulated to the point where their relationship began to take a nosedive. The love was still there, but they became strangers who simply went through the motions of daily life. They may have been alive, but they were not living.

I felt for Quinn and Graham. It was out of their control, yet it was tearing them apart. There were so many times when I wanted Quinn to tell Graham what she was feeling or for Graham to confront Quinn, but things don’t always go as planned. People are imperfect and sometimes communication can be the hardest obstacle to conquer.

For instance, there was a specific moment when Quinn went to her sister-in-law’s place to drop off a gift for her new nephew. When Quinn arrived, she found Graham holding his nephew. Feelings of uncertainty crept through her mind and when she heard Graham’s sister tell him he was a natural, she froze. And then her heart broke at what he said next, “I know. It devastated me that it still hasn’t happened yet.” For Quinn, those words were a metaphorical knife to the gut. After that, Quinn left as quickly as she had arrived, Graham and his sister being none the wiser that she had been there at all.

Later that night, Quinn asked if he held the baby and he lied. Now, at the time, I had been confused as to why he’d lie about that. However, it was all explained in the end.

I wish Graham confronted Quinn at that point, especially since he subconsciously knew that she heard. However, Graham is not the only person who could have said something at this point. Quinn could’ve called him out on his lie, but she chose to avoid it. They both chose avoidance over communication.

I can point out more of these moments, but you probably already know. And if you don’t, what are you doing? Go read the book, stop looking at these spoilers.

Graham and Quinn were not perfect, but who is? What matters is that there was always one person fighting for each other. Even when their future seemed bleak.