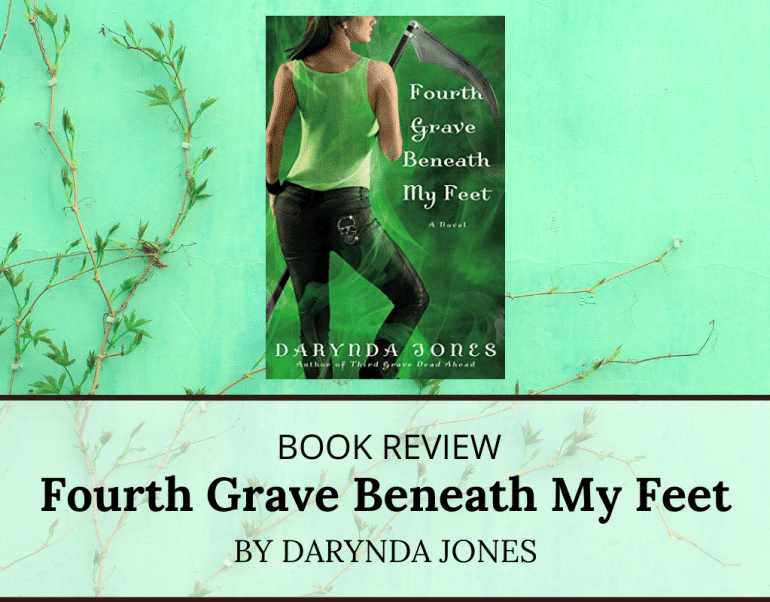 Review of Fourth Grave Beneath My Feet by Darynda Jones

So far, Fourth Grave Beneath My Feet has been the most comical for me and I look so odd when I start laughing which makes it even more hilarious.

Simply put, if you need a good laugh, pull this book out from your bookshelf or amazon and devour it word by word.

The case, this time around, was for Harper Lowell who believed someone was after her. Unfortunately, no one really believed her and thought she was just an attention-seeker.

I want to roll my eyes at everyone who would even consider that and then have a strongly worded “conversation” where I’d kindly explain the holes in their brains. Truthfully, this wasn’t necessarily on the forefront of my mind for this book since the focus was more on Charley and everyone else.

Charley was a bona-fide recluse who would not leave her apartment for a good two months. She’d spend her days watching channels like QVC or home goods and spend, spend, spend. Quite tragic. But she has a legitimate reason. I mean, torture falls under ‘reasons to become a recluse’ in my manual. So does the liquid diet. Never go on a liquid diet unless you really want to lose some weight.

Charley did get out of her funk which was great because a depressed Charley is not exactly a fun Charley. Mainly, she got out of that funk because of her case along with the intervention from Cookie, Uncle Bob and Gemma. Margaritas are all the rage these days.

We see Donavan and his gang again when they rob a bank. Except, they don’t get the money. But the guy who is blackmailing them will. They end up taking Charley hostage, duct tape her to a chair, say their goodbyes since they’re booking it to Mexico and leave. Reyes ends up helping Charley out of the chair and that’s that. Oh and we finally meet Blue during this entire fiasco. She’s quiet.

Getting back to Reyes, something quite interesting happens with him. He dematerialized his physical body…mind officially blown. Who would’ve known he could do that. He didn’t even know. And then we see him slaying all these demons and you just can’t help, but fall a little more into Hell for him.

I’m not sure if I’ll regret saying this later, but I trust Reyes. I honestly don’t think he’s going to turn on Charley unless it’s all an act or Lucifer somehow mind controls him to do something.

Charley also happened to blow a breath of air onto a possessed person which, essentially, booted the demon from the body. Even Reyes was in a state of shock after seeing that. I just want to know what she’s truly capable of. Everyone is always saying that she’s capable of anything and I need to see this already! Then she goes and pulls a Reyes out-of-body experience in the end and I’m all like, “whaaaaa?!”.

Anyway, Reyes and Charley need to just get together already. They’re already committed to each other and all that tension between them—it could honestly start a wildfire. And they even remind me of an old married couple with the way they bicker sometimes.

Their first interaction after 2 months was hilarious. Charley’s excuse for finding him was so he could pay for her investigative services and I loved every moment of it.

“I brought your bill.”

His thick black lashes lowered, and he reached for the paper with his free hand.

“My bill for what?” he asked, perusing what I’d written.

“For my services. I found your father for you. Almost died in the process. My private investigations business is just that, Mr. Farrow: a business. Despite what you might believe, I am not your personal errand girl.”

He quirked a brow the moment I used his surname but recovered quickly enough. He turned the paper over. “It’s written on a Macho Taco receipt.”

Oh Reyes, how could you ever forget something that imperative?

I love their interactions. They bring me life.

And then when Charley went out to watch his fight after he told her to leave…that was great too:

“He’d been talking with his trainer and turned to go into the cage, but after walking up the first step, he paused. Looked down. Took a deep breath. Then placed a pointed stare right on me. I scooted farther into the corner. How could he possibly see me? Maybe he was looking at someone else. He tilted his head before lifting a long arm and pointing to the exit behind me.

They bring me great joy. The fact that Charley thought Reyes wouldn’t sense her makes me question her judgement, but, it’s Charley. She constantly does things that make you question her sanity.

Fourth Grave Beneath My Feet has all the makings of a fun and comical read: tension, ghosts, Macho Taco receipts and Charley Davidson. A perfect recipe!