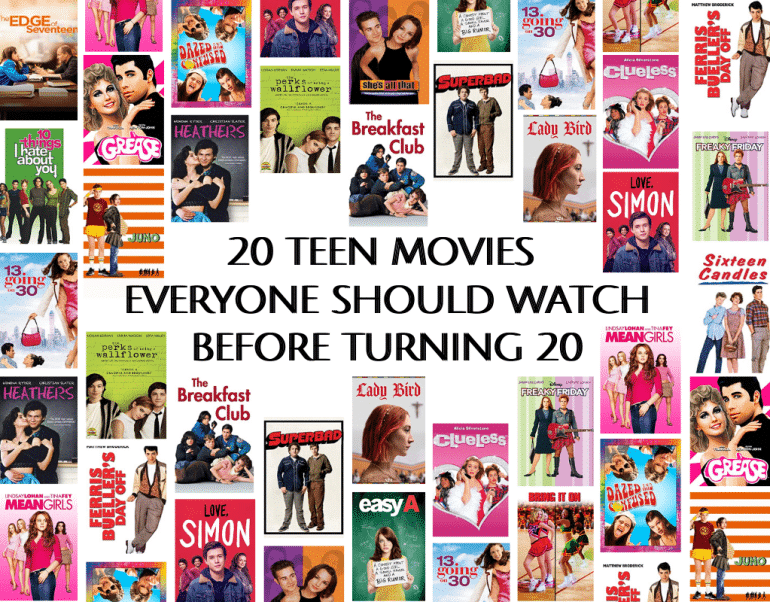 20 Teen Movies Everyone Should Watch Before Turning 20

Films offer a fun way to forget about the stress of everyday life by bringing you into another world, especially for teens who just want to take their mind off things and binge some iconic movies. Teens will find some of these characters relatable and others not, but will have a good time nonetheless.

From the typical popular guy and nerdy girl tropes to the nostalgia-ridden 80s films, you can expect a little bit of everything. So put on some comfy pajamas, pop some popcorn, and cuddle up with your favorite blanket because you’re going to have a blast with these teen movies.

Remakes can be a hit-or-miss. In the case of Freaky Friday, it was definitely a hit. Single mother Tess Coleman (Jamie Lee Curtis) and her teenage daughter Anna (Lindsay Lohan) are constantly at odds with each other. That all changes when they wake up to discover they have somehow switched bodies and are unable to switch back. Along the way, they see a different side of one another and learn that they both have their own set of challenges.

An honest and heartfelt take on a young and closeted gay teen’s difficult journey to coming out. When 17-year-old Simon Spier (Nick Robinson) falls for an anonymous classmate online, he hopes to figure out who the mystery guy is which proves to be hilarious, tender, and, ultimately, life-changing.

Grease is one of my personal favorite musicals, filled with killer songs and unforgettable performances. This 1978 blockbuster follows bad boy Danny Zuko (John Travolta) and good girl Sandy (Olivia Newton John) as they explore their differences and try to find love, but with the T-Birds and Pink Ladies giving their two-cents, it won’t be easy. The ending may be a bit dated depending on how you interpret it, but we’ll always be hopelessly devoted to this classic.

She’s All That (1999) is a classic teen romantic comedy that is sure to make you laugh out loud. Following the downfall of Zach Siler’s (Freddie Prinze Jr.) reputation, he crafts a plan to transform the nerdy loner Laney Boggs (Rachael Leigh Cook) into the next prom queen. A light and predictable watch that doesn’t require much attention. best teen movies

Directed by John Hughes, Sixteen Candles offers all the 80’s nostalgia in this classic film starring Molly Ringwald who plays an angst-ridden Samantha, experiencing the worst sixteenth birthday when her entire family forgets. Add in her longtime crush Jake Ryan (Michael Schoeffling) and you have yourself an entertaining movie with an A-list cast. Still, that doesn’t take away from the problematic and disturbing issues apparent within the film.  best teen movies

The old adage saying be careful what you wish for is true for 13-year-old Jenna (Jennifer Garner) after a wish turns her into a 30-year-old woman. Skipping adolescence may sound glamorous as a teen, but Jenna soon learns that it’s not all sunshine and rainbows. This heartwarming film is the perfect blend of romance, comedy, and a dash of fantasy. And you’ll probably want to try some razzles by the end. best teen movies

Saoirse Ronan delivers a powerful and convincing performance in this poignant, coming-of-age film about a high school senior who must navigate a loving, yet tumultuous relationship with her mom (Laurie Metcalf) which is made worse by Christine’s “Lady Bird’s” insistence on upholding her individuality. best teen movies

Kristin Dunst and Gabrielle Union face off in this iconic cheerleader movie. The Toro cheerleading squad from Rancho Carne High School plan to bring home the national championship trophy for the sixth year in a row, but Torrance’s plans are put in jeopardy when she realizes the routines were stolen from Clover, their competition. If you’re looking for a fun and light sports comedy that doesn’t take itself too seriously, Bring It On is the perfect option.

Juno tackles numerous topics, from teen pregnancy to adoption to confusing love, with a refreshing and comical take. This hilarious comedy follows Juno MacGuff (Ellen Page), a pregnant teen who chooses a failed rock star (Jason Bateman) and his wife (Jennifer Garner) to adopt her baby. In the midst of this, Juno is forced to make tough decisions and do some soul-searching to find her identity.

For an entertaining retelling of The Scarlet Letter, Easy A has you covered. Deemed the school slut after allegedly sleeping with a fellow classmate, Olive (Emma Stone) is shunned by her peers and loses her best friend in the process. As her life falls apart, Olive decides to live up to her newfound title by dressing and acting the part. Filled with laughs, humor, and a brilliant cast, you’ll undoubtedly enjoy this satirical film.

Deliciously dark and wickedly cynical, this classic dark comedy was an exception to the typical 80s teen movies. Veronica Sawyer (Winona Ryder) is part of the most popular clique at her high school who all happen to share the same name. When she and her new boyfriend J.D. (Christian Slater) accidentally poisons one of the girls, they cover it up.  Veronica thinks it’s over until she realizes J.D. has a penchant for killing people… intentionally.

“All right, all right, all right,” let’s discuss Dazed and Confused. This hilarious coming-of-age film launched the careers of several stars: Ben Afleck, Adam Goldberg, Milla Jovovich, Matthew McConaughey, and Parker Posey. Set in Austin, Texas, a group of teens celebrate their last day of high school in 1976 by hazing freshman, going to a local pool parlor, and throwing a keg party. Anyone who was a teen in the 70s will definitely be feeling nostalgia by the end.

The 1986 bonafied teen classic Ferris Bueller’s Day Off is about a sneaky teen named Ferris Bueller who persuades his best friend and girlfriend to embark on a one-day journey driving through the streets of Chicago. Of course some roadblocks pop up in the form of stolen cars and a certain principal determined to prove that Ferris is playing hooky.

Based on Stephen Chbosky’s novel, The Perks of Being a Wallflower starrs introverted teen Charlie (Logan Lerman) who is praying to get through his next school year. His pleas are answered in the form of Patrick (Ezra Miller) and his step-sister Sam (Emma Watson) who take Charlie under their wings. This poignant coming-of-age film touches upon a range of sensitive topics including depression, death, suicide, and sexual abuse.

This hilariously raunchy and equally heartfelt film is a popular hit among teens and adults alike. An invitation to a gigantic high school party kickstarts this fantastic film when two best friends decide to take it upon themselves to buy alcohol for the party, but their plan goes awry in the most ridiculously hysterical ways. best teen movies

This modern adaption of Shakespeare’s The Taming of the Shrew is the ultimate retelling featuring Julia Stiles and Heath Ledger. This retelling revolves around the sarcastic and critical high school senior Kat Stratford and the new dark and mysterious student Patrick Verona. Seeing Heath Ledger sing “Can’t Take My Eyes Off You” is iconic and the moment when Kat reads her poem will move you beyond words.

This 1995 film revolves around the shallow and rich teen named Cher (Alicia Silverstone) who is at the top of the food chain at her Beverly Hills high school. After giving the helplessly klutzy new student Tai (Brittany Murphy) a makeover, she climbs the social ladder and becomes Queen B which leads Cher to realize that her ex-step-brother Josh (Paul Rudd) was right about her shallow outlook on life and you know what happens next (*wink wink*). “Ugh, as if.” best teen movies

The Breakfast Club is an 80s classic with quite the cult following. The infamous fist pump at the end accompanied by the hit song “Don’t You (Forget About Me),” was one of Judd Nelson’s best improvised moves and trust me, no one will be forgetting about this ragtag bunch for a long time. They’re unforgettable. best teen movies

“You go Glen Coco!” “On Wednesdays we wear pink.” “That’s so fetch.” “Get in loser, we’re going shopping.” Mean Girls is the ultimate cult-classic and with the number of iconic quotes, you cannot go wrong with this popular film. And you can’t say we didn’t learn anything; I mean, we will forever remember that the limit does not exist.

RELATED: 11 Sad Movies That Will Make You Cry