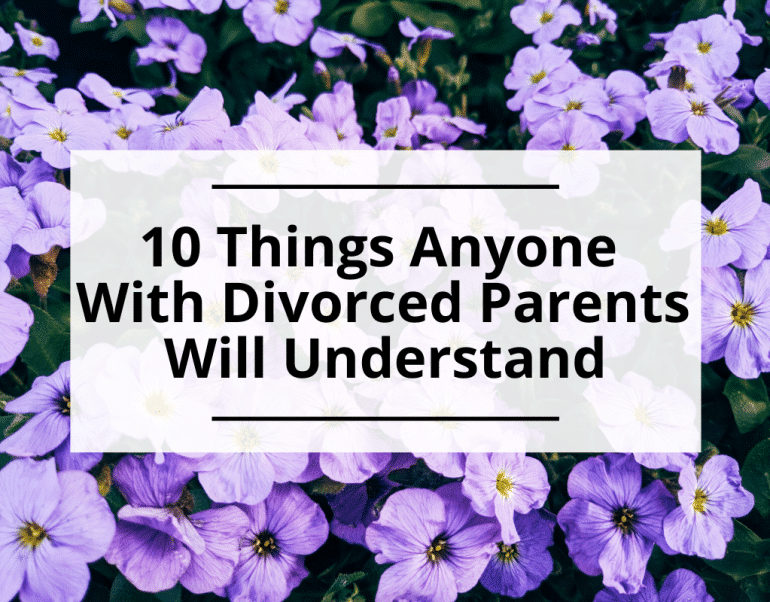 10 Things Anyone With Divorced Parents Will Understand

Growing up with divorced parents can be downright chaotic at times. From going back and forth between homes to remembering to pack all the necessities to messy problems like custody battles and child support, children of divorced parents are (typically) intimately familiar with these unique, yet common situations. Here are ten things anyone with divorced parents will understand.

Going back and forth between both homes can be a real pain in the butt. You basically have a travel bag dedicated solely to traveling between homes. After all that packing, one would think you’d become an expert packer. Well, that’s not always the case.

Once upon a time, my packing skills were pretty good since I only packed what I needed. My needs must have expanded because now it’s like I’m packing for a “month-long” vacation (as I’ve been told) rather than a week. I disagree, but they’re probably right. I mean, I definitely overpack when it comes to clothes, especially during this quarantine. Instead of simply packing a few pairs of sweats and lounge shirts, I feel the need to add in some jeans and cute tops. Why? I don’t know.

Almost no one outside of you, your siblings, and your parents will remember the schedule and when someone asks where you’ll be, you try explaining the jigsaw puzzle that is your life.

To anyone who has never had a schedule like this, it probably sounds incredibly complex. For us, it’s a way of life.

You Become the Middleman

The number of times my parents have told me to let the other parent know about upcoming plans and appointments is insane. You would think it’d be much easier to send a quick text and delete the middleman, but they almost never do. It can get irritating, especially when you forget about it and they get annoyed with you. I mean, there’s something wrong with that scenario.

If they’re not on good terms, all bets are off. You have become the bonafide peacemaker between the two.

Don’t even get me started on the number of small digs I’ve heard over the years. Lately, they’re fewer and farther in between, but it used to be weekly. Your mother never takes you to appointments. Your father always forgets to take you to appointments and then it falls on me.

When they drop those kinds of bombs, it becomes a minefield. To agree or to disagree, that is the question. I know the answer, but I refrain from giving it because I know how it will go down. For that reason, I have become Switzerland. How can you ever be mad at Switzerland? Well, I’ll tell you how. If Switzerland chooses to never give a straight answer, both parties typically become increasingly annoyed and irritated.

Custody and child support… the bane of my existence. Ah, thinking back to that time really gives me all those warm fuzzy feelings. Not. It was awful. I cannot stress that enough. There are highs and lows of divorce and this was definitely one of the lowest lows.

Child support is a big deal. You would never guess it has the power to create such conflict and discomfort. When child support was still a thing with my parents, they would constantly bring it up. I know they were simply expressing their frustrations, but it put my sister and I in an awkward place, especially during the custody battle. Oof, that was not a fun time.

The entire process of going into court and telling the social worker who you want to live with and whether you want to do 50/50 is not a fun experience.

My Parents Are… Dating?

I’ll admit, it was strange at first when my parents began dating. In the beginning, I was against it since I had this notion that they would get back together. Obviously, that never happened which is for the best. Otherwise, I wouldn’t have the family I have now or the fun stories.

I don’t know if you have ever watched your mom go on a date without the date knowing you were there, but that’s what my sister and I did. They were planning on meeting up at a cafe and we wanted to come along to grab a bite which, by the way, was a complete dud. The cafe had the smallest selection known to man. Actually, I take that back. I have undoubtedly been to worse cafes. To be honest, I’m being way too harsh. There was nothing wrong with the cafe. I was merely hungry and nothing caught my eye.

Well, that was entirely off track. Let’s get back to the story. Watching my mom on a date was slightly strange. I felt like I was in a mashup of a James Bond movie and Criminal Minds, spying and profiling.

Yeah, this isn’t Cinderella. I remember having this assumption that it would be similar to Cinderella; luckily, there have been no evil stepmothers or sisters in my life.

Explaining the family dynamics, however, is a whole thing. From my experience, it takes people time to finally grasp where everyone fits, especially when you bring in half-siblings… So is your brother your mom’s son or your dad’s? Dads. Wait, is Belle your half-sister? No, step-sister. And you end up having to explain that all over again when you want to tell that friend a story involving them.

Birthdays, holidays, celebrations… from now on, everything comes in twos. Sometimes it comes in handy. For instance, on Thanksgiving my sister and I might go with our mom to a family member’s house and then go to our dad’s after. It’s the best of both worlds because we get to see everyone. Plus, if you’re tired of being with one side of the family, you can easily leave since you have a legitimate excuse. However, this setup is not always the case. It usually switches every other year which can be irritating if you want to see everyone.

I don’t know about you, but there are times when I cannot wait to escape to my mom’s after being at my dad’s for a week and vice versa. Plus, the houses are polar opposites. My dad’s place is loud, crowded, and constantly in motion whereas you can “hear a pin drop” at my mom’s as my dad likes to point out. They’re at different ends of the spectrum (I’m probably being extreme by saying that).

On A Positive Note

When you think about the living situation when your parents were still together, whether that was constant fighting or radio silence, you realize that it is better this way. It may still be stressful at times, but the divorce was probably for the best and it’s important to respect their decision. For me personally, it took a while to come to terms with the split, but it eventually becomes the norm and there will always be good times ahead, whether your parents are divorced or together.

Growing up with divorced parents can be difficult at times. There will probably be a smattering of lows, but there will also be an infinite number of highs. You just have to remember that everything will be okay and you will definitely survive the digs, custody battles, and child support arguments. Don’t be afraid to let your parents know how you feel, especially if it’s having a negative impact on your mental state.

During one particularly bad night in the midst of the custody battle, I let loose my feelings in a “journal.” I use air quotes because it was definitely not a journal. It was originally supposed to be a mini scrapbook when I made it back in fifth grade. Years later, my mom was going through my closet, stumbled upon it, and read it thinking it was nothing. To say I was shocked when she brought it up to me would be an understatement. I completely forgot I ever wrote that and I can only imagine what I said in that entry. However, not only did she apologize, but she also admitted how she never realized I felt the way I did. Of course, at that point, it was water under the bridge, but it was still nice to hear her say that.