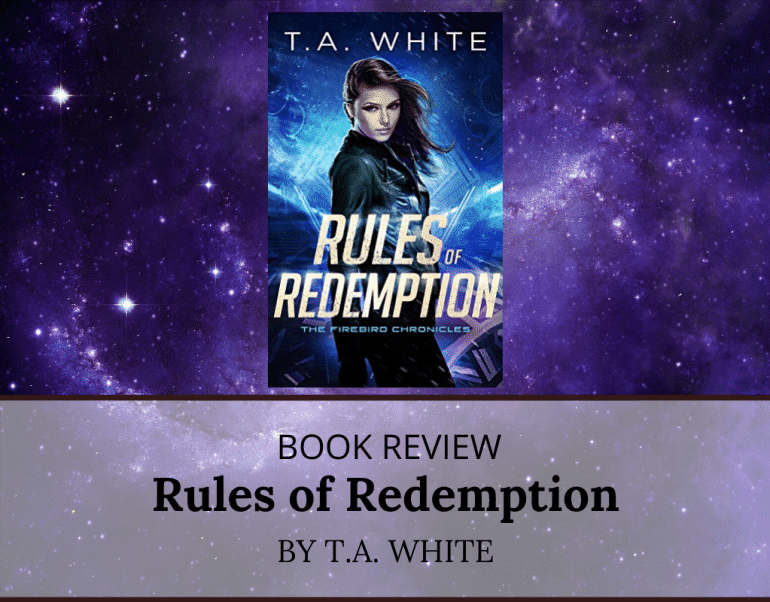 Review of Rules of Redemption by TA White

The war may have ended, but it’s not finished with Kira Forrest.

Declared a war hero, Kira chose to leave all that behind for a simple life as a salvager with her best friend Jin, a human drone. Finding salvagable parts from alien spacecrafts is a risky line of work; especially with all the traps on the Tsavitee’s ships, from razor ash to strigmor eels. The Tsavitee were the first alien race to make themselves known to humanity and later responsible for the bloodbath that rained down on Earth.

The Tsavitee had many forms, depending on its position in their ranks. This one would have been infantry, humanoid in appearance with two legs and two arms, a head with eyes, nose, and mouth. That’s where the similarities ended.

This one was larger than any human by at least a foot, its form hulking and muscular with skin the color of graphite. She judged him as in the lower ranks given the visible tusks and the stunted horns curling up from its head.

The horns and fearsome appearance were how they came to be called demons by the human fleet. In a way, they did resemble the creatures of nightmares from old religious texts.  – T.A. White

After a botched mission leaves their ship in need of a new engine, Kira and Jin reroute to the nearest station, O’Riley. Their plans to keep a low cover are blown after rescuing two children from a compromised craft. The two children in question happen to be Tuann, a technologically advanced alien who distrust humans. When their security detail arrives, all hell breaks loose after one of the guards realizes Kira has the marking of a Tuann.

Still, Kira cares little for this revelation and would rather put this all behind her except there’s one stubborn warrior in her way, Lord Graydon, which is how she, Jin, and a few more humans end up on the Tuann’s spacecraft, headed to Luatha.

However, the golden utopia that is Luatha is not as safe as believed. After all, no civilization is completely guarded from the traitors posing as allies. The question is, will Kira catch on before they are thrown into another gruesome war?

Rules of Redemption is hands down one of my favorite fantasy books of 2020 so far.

Filled with fascinating characters that tug at your heartstrings and thrilling action-packed sequences that get your blood pumping, there’s never a dull moment in T.A. White’s Firebird series. The world-building was fantastic. I loved learning about the Tsativee and the many layers of the Tuann.

What truly caught my interest was the first page. Yes, the first page. White’s killer writing skills instantly thrust me into this apoctoplyptic world. With the amount of detail she infuses into her story, you never have to guess what something looks like. You should be able to easily imagine it, especially regarding the first few pages. White did a phenomenal job personifying the spacecraft as if it was a dead corpse. Her use of personification is on point throughout the entire story.

Now, let’s move on to our main badass characters that bring Rules of Redemption to life: Kira, Jin, and Graydon.

“She’d learned many hard lessons about the peril of letting hope run away with you. It was the ultimate liar, an illusion turning smart people into fools, sundering their hearts from their chests when hope inevitably crashed them against the rocky shore.” – T.A. White

Kira is a strong heroine with a mysterious and complicated past that isn’t entirely revealed until the end although there’s still a lot that’s unknown.  One thing you quickly learn is that Kira is not someone to underestimate as the Tsavitee learned after hundreds, even thousands, of their soldiers died at her hands. Kira is the epitome of a cockroach. Add in her strong moral compass and you have someone who puts herself into harm’s way to save those she loves.

“No, my reserves are too low after saving you.”

She gave him a sidelong look.

“I didn’t say you were heavy,” he defended.

Jin was once a human but his essence somehow became trapped within the body of an AI drone. As Kira’s closest confidant, we see a lot of Jin and they have such an amazing friendship; they’re not afraid to call each other out on their bullshit. Without Jin’s humor, Kira would have definitely gone stir-crazy a long time ago. They’re a dynamic duo and complement each other perfectly.

Now, last but not least, our hero Graydon. Stubborn, protective, loyal, bossy, strategic, and perceptive: Graydon is all of this and more. As one of the five lords/commanders under the Emperor, he has considerable sway among the houses and exercises that power when necessary. One thing about Graydon is that he always gets his way… something Kira is not inclined to do. She moves to her own beat. A match made in heaven.

Overall, if you like fantasy mixed with science fiction, action sequences, dynamic characters, and a slow burn romance, then Rules of Redemption will definitely win you over. I would suggest it for all you fantasy nuts looking for the next best thing!

Check out Rules of Redemption