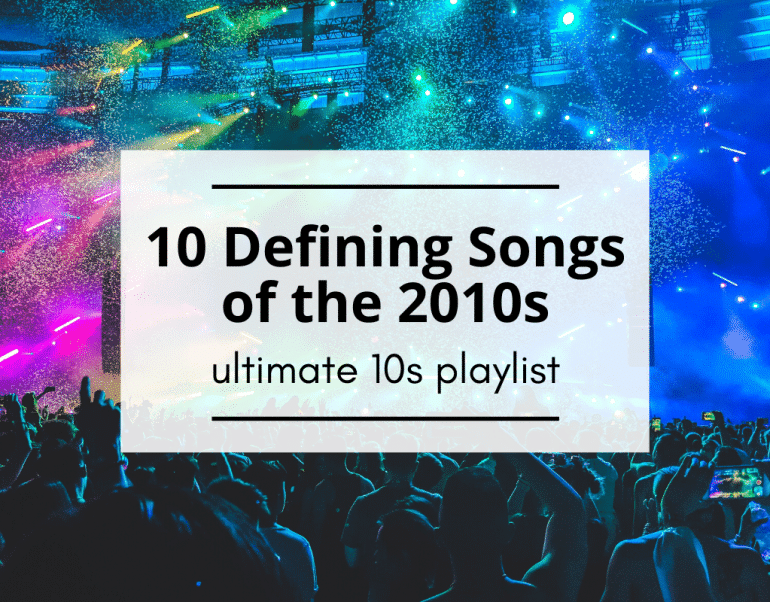 For an all out 2010s vibe, this playlist features some of the best songs from the decade and more. You can find the full playlist on Spotify below.

From the first song that reached a billion views on YouTube, “Gangnam Style,” to classics like Adele’s “Rolling in the Deep” and Lorde’s “Royals” to pump-up songs like “Turn Down for What” and “Can’t Hold Us.”

Before we get to the playlist, let’s look back at the most popular song from each year, 2010 to 2019, according to the Billboard charts.

Kesha dominated the charts with her breakout hit “Tik Tok” and would set the tone for what pop music was going to sound like. However, there were many artists like Lady Gaga, the Black Eyed Peas and Katy Perry who would set the stage for the upcoming pop era.

“Rolling In The Deep” by Adele

Adele’s “Rolling In The Deep” was a pop sensation, staying No. 1 for seven weeks straights. In fact, 21 never left the Billboard’s top three for the first six months after its release. “Someone Like You” and “Set Fire To The Rain” would dominate the charts turning 21 into one of the longest-running No. 1 albums of the 21st century.

“Somebody That I Used To Know” by Gotye featuring Kimbra

Gotye and Kimbra took the world by storm with their hit release “Somebody That I Used To Know” and their noteworthy music video which went viral. In the year of EDM, from Calvin Harris and Rihanna’s “We Found Love” to David Guetta’s “Titanium” with Sia, the success of Gotye’s song was a bit of an anomoly, but we all love it.

Macklemore and Ryan Lewis’ “Thrift Shop” topped the charts with the fun beats and catchy lyrics. However, this was also the year that Miley Cyrus reinvented herself with the powerful ballad “Wrecking Ball” and the added controversial video. Some people remember that time as a complete betrayal and others were jamming along to this new Miley. It was undeniably a controversial time.

Pharrell Williams’ smash hit song “Happy” became a global sensation in 2014. Streamed more than 700 million times on Spotify, it’s Pharrell’s most played song. It was the type of popular where radio stations would play it 24/7, to the point where it became sigh-provoking. In fact, for my digital and media design class, we had to create a music video to… you guessed it, “Happy.” Listening to lyrics over and over again can quickly turn any song into an overplayed nuisance.

With its memorable lines, catchy beat, and retro feel, this funky jam was not only a defining hit of 2014, but the entire decade. Remember when Video Star was alive and strong? My sister and I actually made one to “Uptown Funk” and it was… unique to say the least. I’m not too sure about my choice of outfit, but hey, it is what it is.

“Love Yourself” by Justin Bieber

It’s no secret that Justin Bieber went through a rough patch in 2013 and people were unsure if his career would fizzle out like many child stars. However, that was not the case when he released Purpose, a sensational album featuring multiple well-known hits: “Sorry,” “Love Yourself,” “What Do You Mean,” and “Where Are Ü Now.”4

“Shape Of You” by Ed Sheeran

2017 was an exciting year with a steady stream of blockbuster hits, from Luis Fonsi and Daddy Yankee’s mega-sensation “Despacito” featuring Justin Bieber on their remix to Mars’ “That’s What I Like” and “24K Magic” to the most-played song that year Ed Sheeran’s “Shape of You” with its catchy vocals and rhythmic beat. You can’t help but sing along with Ed and bop your head to the beat.

Hip hop was striving and thriving in 2018 with hit after hit from breakout artist Cardi B including “I Like It” and “Bodak Yellow” along with Post Malone’s melancholy smash hits “Rockstar,” “Better Now,” and “Psycho” to Drake’s “In My Feelings,” “Nice For What,” and, of course, “God’s Plan.”

Lil Nas X may seem like an overnight success, but it was actually years of work that paved the road to his massive success with the breakthrough, multi-genre sensation “Old Town Road” featuring Billy Ray Cyrus. Billie Eilish also released her killer album When We All Fall Asleep, Where Do We Go? showcasing a series of haunting melodies and moody beats from “bad guy” to “when the party’s over” to “bury a friend” and “you should see me in a crown.”