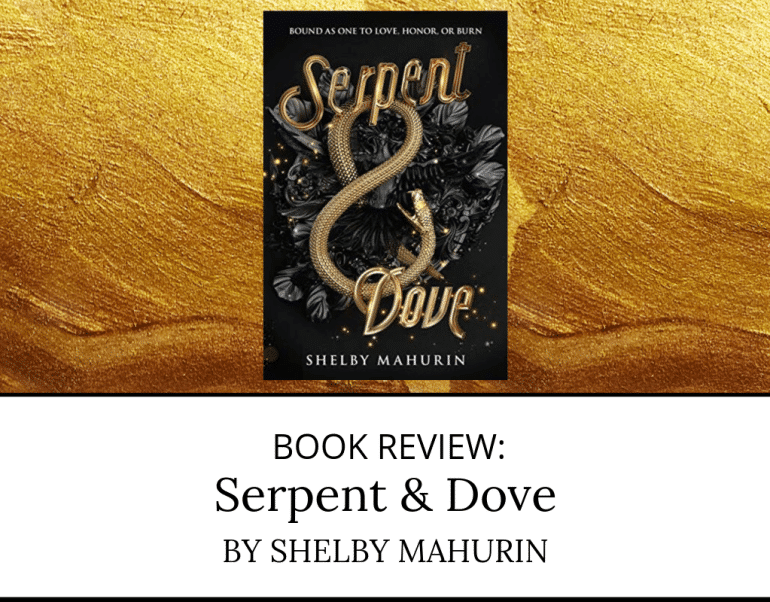 “You’re to be my wife.” Catching up to her in two strides, I reached out to grab her but stopped short of touching her. “That means you’ll obey me.”

“Does it?” She raised her brows, still grinning. ” I suppose that means you’ll honor and protect me, then? If we’re adhering to the dusty old roles of your patriarchy?”

I shortened my pace to match hers. “Yes.”

She clapped her hands together. “Excellent. At least this will be entertaining. I have many enemies.”

Louise le Blanc escapes to the city of Cesarine where she blends in as a common thief, hiding the fact that she’s a witch. If the wrong person finds out, she may find herself burned at the stake as witches are feared and hunted by the masses.

As a Chasseur (huntsman) for the Church, Reid Diggory is bound to one duty: kill all witches. However, he finds himself in a precarious predicament when Lou pulls a sly stunt that ultimately ends with the two becoming husband and wife.

My Thoughts on Serpent & Dove

Serpent & Dove is a masterpiece. Every word. Every character. Every freaking bit of world-building. Absolutely brilliant. Shelby Mahurin’s debut definitely has me excited for her future works and I especially cannot wait for Blood & Honey, the sequel to Serpent & Dove.

Lou is a heroine who you will love. She’s confident, bold, sarcastic, humorous and has a “takes no shit” type of personality. Oh and she’s great at keeping her secrets under lock and key. Of course, that makes her the perfect witch to show those hunters how wrong they are by labeling all witches as evil. News flash, one bad seed does not mean everyone is the same. But really, Lou is iconic. She had so many hilarious/bomb lines.

Reid is such a sweet and misguided hero. Loyal to the Church and practically like a son to the Archbishop, his place has always been as a witch hunter. If he had originally known that Lou was a witch prior to falling for her, I’d say she would have burned at the stake. Reid’s naivety and old-fashioned outlook on life definitely made for some funny and facepalm type of moments, but you can’t help but love him anyway.

There is also Coco Dame Rouge is Lou’s best friend and she is a badass individual as well. I absolutely love how loyal they were to one another. In fact, they had this (sort of) implicit rule to not leave each other behind. Coco is a part of the Dame Rouge Coven where they use blood magic.  Lou, on the other hand, is from a line of witches that find patterns (that only they can see) which they manipulate to perform magic.

Now, if you prefer a slow-burn romance that makes your insides tingle and your toes curl, you’re in the right place. Lou and Reid do not have an instantaneous, “love at first sight” type of relationship which is so much more satisfying. The build-up is real and makes you root for them. By the time they finally discover their feelings for one another, you just want to fist-pump the air.

Also, Lou has a lot of influence over Reid. The reason why I say this is because before meeting Lou, Reid was a straightlaced, “pure” individual with the mind of a saint. Married life (Lou) changed him. I mean, he swore. If you haven’t yet read this, you’ll understand the significance of this when you come across the swear. It’s great. Watching reign in his anger is quite humorous. By the end, he just gives up on keeping a calm face.

Overall, Serpent & Dove is such a fun and addicting story. I literally did not want to put it down one night, so I kept reading until even though I had planned to be up by 8:00. Well, that did not happen. The w part about that entire situation was how I didn’t even finish it that night.

“I loved her. Despite everything. Despite the lies, the betrayal, the hurt. Despite the Archbishop and Morgane le Blanc. Despite my own brothers. I don’t know if she returned that love, and I didn’t care. If she was destined to burn in Hell, I would burn with her.”