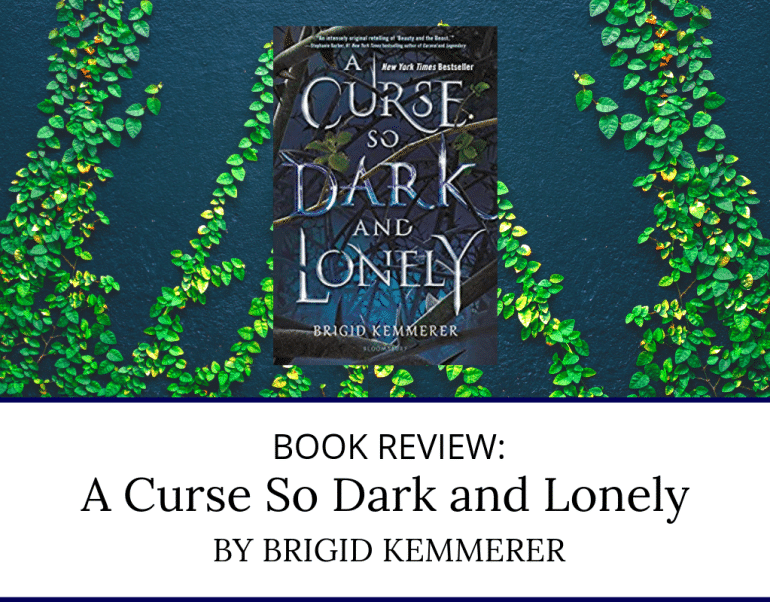 Review of A Curse So Dark and Lonely by Brigid Kemmerer

“This early in the season, the other girls would sit by the hearth and gaze at me over crystal goblets, while I’d pour wine and tell stories with just enough devilishness to make them blush. If I put a crystal goblet in this one’s hand, she’d likely smash it and use the shards to cut me.”

WOW WOW WOW! I was not expecting that…

A Curse So Dark and Lonely is an exciting retelling of Beauty and the Beast, but with some intriguing and thrilling twists. The world-building is great and it truly pulls you into

Prince Rhen is cursed by an enchantress to repeat the autumn of his eighteenth birthday. To break the curse, he must fall in love. Rhen thought that would be easy enough until he turned into a vicious monster that feeds on death and destruction. Until he murders his entire family and hundreds of his subjects.

Harper has never had the easiest upbringing. From an absentee father who left his family to deal with his mistakes, a mother who only has weeks left to live and a brother who underestimates her because of her cerebral palsy. When she sees what appears to be a kidnapping in action, Harper steps in and whacks the would-be kidnapper in the head…and ends up in Emberfall.

From there, she is thrust into this alternate world that is so much different than Washington, D.C. While there, she pulls off multiple escape attempts and gives Rhen and his commander Grey a run for their money. However, Harper may have just become their biggest ally in their fight against an invading army and a political uprising.

I’ve had A Curse So Dark and Lonely on my TBR shelf for a months now and I’m happy I finally freaking read it. Ugh, took me long enough.

The characters all drew me in. From Harper’s resilience and no bullshit attitude to Rhen’s charismatic and strategic mind to Grey’s unending loyalty and strength. These three characters were freaking amazing and I love them all.

The only character I would to skewer with a rusted metal rod is the enchantress Lilith. She’s honestly the devil incarnate. Her name suits her perfectly.

Harper never came off as a whiny, selfish teen from D.C. which is a blessing because I cannot take some characters who constantly complain or make incredibly stupid decisions without actually thinking of the consequences.

“My left leg is clumsy and about to give way, but I mentally threaten to cut it off if it doesn’t get me out of here. It listens.”

On that note, there were some stupid decisions, but I back most (all) of them. When Harper made her second escape attempt by climbing down a trellis, I was all for it. Actually, I was hoping she would actually escape without Rhen and Grey even noticing. One of my biggest pet peeves is when someone tries to escape and makes it only a few yards before they’re recaptured. I mean, come on. Luckily, she made it a few miles! Of course she almost got killed doing it, but still, she did it!

There is also no instant love, thank the book gods for that. In fact, this may be one of the slowest moving romances I’ve read in a while.

I don’t think I’m giving anything away by saying this, but I loved Rhen’s beast form. I’m pretty partial to that type of creature, so I was all for it. In fact, there were like two chapters where I was cheering them on. Again, I’m not giving anything away, I hope.

A Curse So Dark and Lonely is an enthralling retelling that involves a beauty and a beast with a modern spin that gives it a breath of fresh air. It’s probably one of the best retellings I’ve read in years, so I recommend this 100% if you’re interest is piqued.

“I am always surprised to discover that when the world seems darkest, there exists the greatest opportunity for light.”

Read A Curse So Dark and Lonely

If You Love Beauty and the Beast Retellings, Try…