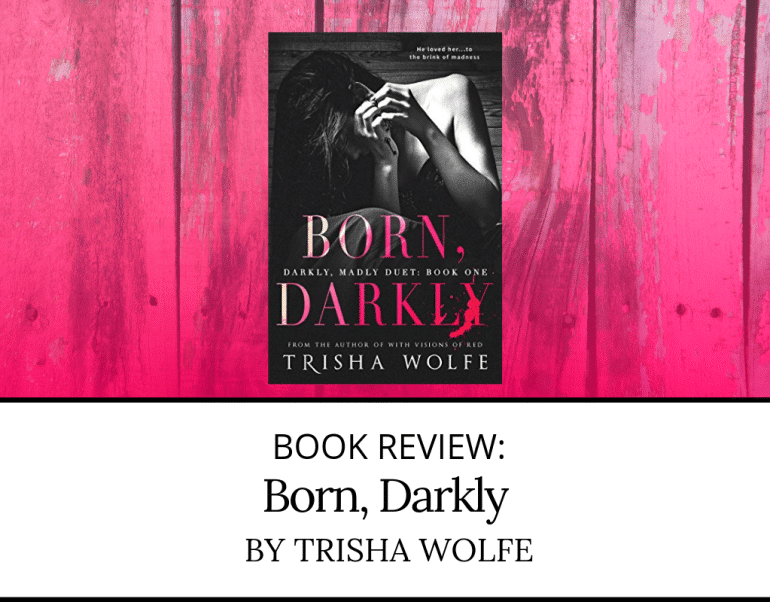 “No, I do not believe rehabilitation is achievable. Especially for the Bundys and Dahmers of the world. They are governed by their Id—and the Id is the ultimate monster.”

Who doesn’t love a good psychopath/psychologist relationship? It’s such a taboo. Well, actually, it just usually doesn’t happen. Unless you’re Harley Quinn and the Joker. Then you’re a goner. Good luck with that.

Born, Darkly begins by introducing us to London Noble, a criminal psychologist who tries to rehabilitate those who seem too far gone to be saved. Grayson Pierce Sullivan is a murderer who believes himself to be , judge, and executioner on those who commit heinous crimes; similar to Dexter. London has her hands full of criminals and is resistant to taking on another one until the warden forces her hand. That, my friend, is when London’s life takes a nosedive for the worst.

Is it insane that I was kinda hoping for Grayson and London to forego the doctor/patient relationship and head straight into the place of no return (if you know what I mean)? I know, who would ship that? How can I ship that?! It’s wrong and slightly improbable, but I don’t care.

Then again, Grayson is such a twisted individual with this vigilante persona that makes you think of Dexter and then you’re like “oh he’s not that bad I guess, maybe.” Next thing you know he’s burying someone alive and creating a trap straight out of Saw. He needs help. I understand that. Yet, for some strange reason, I kind of like him. Of course, I’d never want to meet him because I feel like he’d find dirt on me (like how I forgot to get a friend a gift for secret Santa). I don’t want to die in one of his traps.

Besides Grayson’s twisted nature, there were a few other aspects that stood out. For one, the psych lingo was spot on. I absolutely loved hearing about antisocial personality disorder and seeing how London diagnosed some of her patients (mostly Grayson). The funny part of the story though is how London is the psychologist, yet she ends up being the one getting free therapy sessions (some not so ethical however) which brings me to my next point; Grayson is one smart cookie. He freaking managed to escape death twice and then brought Dr. Noble to her breaking point which still leaves him 100 steps ahead of the police. He’s insane.

“You’re mine, London. We can dance this violent dance until we bleed each other dry, or we can surrender. Your choice. But I will have you.”

See what I mean?! He’s an obsessed man with serial killer tendencies who believes himself capable of being judge, jury and executioner. If that’s not madness, I don’t know what is. The only silver-lining is that he only goes after other people who have committed crimes (pretty evil crimes – at least that’s what I tell myself to help me sleep at night). So if you have a clean record, you’re in the clear. Just don’t go killing people or he and his hypocritical ideology may come looking for you.

Ugh, I understand he’s getting rid of evil people, but that doesn’t make it right. Ahhhh! I can’t do this right now. There’s so many ethical problems with Grayson, yet that didn’t stop me from loving Dexter. Huh, what people can make you feel. It’s crazy. Trisha Wolfe is freaking amazing. She knows how to write some sick characters.

“We’re monsters. And our love is this monstrous thing that will devour us.”

If you’re in the mood for an unconventional love story where the psychologist falls for a serial killer then Born, Darkly is the perfect fit. Also, it helps if you love all things sick and twisted that tend to decimate the boundaries of ethics. It’s a messed up ride. I hope you have a shocking ’ time.

If you’re in the mood for a serial killer type of story, then here is a list I put together of seven fictional serial killers you would not want coming after you.