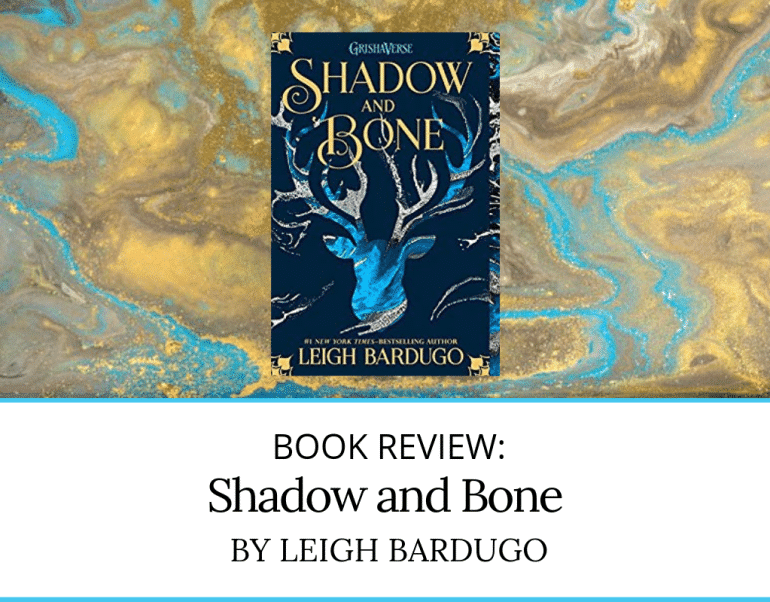 Review of Shadow and Bone by Leigh Bardugo

“The problem with wanting,” he whispered, his mouth trailing along my jaw until it hovered over my lips, “is that it makes us weak.”

If you’re like me, then this book has probably been sitting on your TBR shelf for a while.

I mean, I’m 8 years late to the party. I honestly don’t know why I chose not to read Shadow and Bone sooner?!

Leigh Bardugo’s story-building is phenomenal; it’s a completely different world filled with humans, Grisha and magical creatures. Humans are, well, human. The Grisha are human in every way except for their special, magical abilities. However, they don’t necessarily see it as magic; instead, they consider it to be a “small science”.

In the beginning of Shadow and Bone, we see Alina and Mal, two orphans hiding in the cupboard together. They became thick as thieves during their years at the orphanage and that doesn’t change when they are both chosen to serve in the First Army: Alina becomes a cartographer and Mal a tracker.

The army’s main goal is to team up with the Grisha to destroy the Fold; a place devoid of light and life except for the Volcra. Volcra were once human, but became something else entirely after staying in the Fold for too long. Now, they are flesh-eating creatures with leathery wings. Razor-sharp teeth and long, dirty claws.

Mal and Alina’s unit is returning from the Fold when they are attacked by the Volcra. They are greatly outnumbered and it appears they are fighting a losing battle. Alina and Mal are working alongside each other when a Volcra attacks Mal. Alina acts on autopilot and acts as a human shield as the Volcra shoots towards them. In the next few seconds, blinding light explodes out of Alina; something only a Grisha can do.

Alina is brought to the Darkling who comes to the realization that she is a sun summoner; a rare Grisha who he’s been waiting for. She is whisked off to the Little Palace where she is educated as a Grisha and taught to control her ability. However, she isn’t able to grasp her power without an amplifier helping her. The only two Grisha amplifiers around are the Darkling and Baghra who also happens to be an ancient darkling.

The Darkling seeks to amplify Alina’s power immensely with the antlers from a mythical stag. From there, you’ll have read to figure out what happens.

I highly recommend Shadow and Bone to anyone who loves fantasy, villains, amazing world-building and kickass characters (you’ll know who I’m talking about when the time comes). It ends with a cliffhanger so prepare for a long night. I was way too tired to start Siege and Storm last night, so that’s what I’ll be doing right after this review!

“I’m not used to people trying to kill me.”

The Darkling is an enigma of sorts. You don’t know much about him. I mean, we never find out his name in the 350 pages of Shadow and Bone. He is the epitome of the tall, dark and mysterious trope. I mean, he’s literally tall, dark (Darkling) and mysterious (we don’t even know his name).  At the moment, he is the most powerful Grisha alive (maybe) and is only second to the King. He’s practically a King when you think about it.

“The Darkling slumped back in his chair. “Fine,” he said with a weary shrug. “Make me your villain.”

Alina, on the other hand, has the potential to be as powerful as the Darkling. However, she’s just learning about her power. The Darkling has had centuries to learn how to wield his. With that said, I’m not sure what will happen in the next two books. Actually, I kind of know because I accidentally read some spoilers…sad times.

You don’t see much of Mal as the story centers around Alina and Mal is nowhere near Alina for 75% of the story. With that said, I’m rooting for those two to get together. I know, I know, how can that be when she was with the Darkling for so long? Well, things happen and feelings change. It’s life. Well, actually, it’s books.

If you have already read Shadow and Bone, I’d love to hear your thoughts on it down below in the comments.

Recommendations If You Liked Shadow and Bone

This fantastic fantasy novel takes place in a land filled with magic, deception and danger. Assassin Celaena Sardothien is summoned to the castle where she is to fight in a competition with twenty-three killers, thieves and warriors. The prize: to serve as the king’s champion and her freedom. However, the Crown Prince doesn’t make it easy on her and the Captain of the Guard tries to help her. In a world where lies are common and death can come right after your next meal, the stakes are high.

Love the villain? Then you’ll love Vicious. Vicious is one of the most ruthless literary assholes out there. He has a heart of stone and basically treats everyone like dirt; a real winner over here. The person who is on the receiving end of his taunts and ridicule the most is Emilia LeBlanc, the daughter of the hired help living on his father’s mansion. He treats her like utter crap and eventually runs her out of town. Ten years pass and they meet again. Vicious wants her back and won’t stop until he wins her over. This is a wonderful story and Vicious is a redeemable character in the end.

The False Prince by Jennifer A. Nielsen

The False Prince follows Sage, a teenage orphan who is recruited by a nobleman, Connor, to impersonate the king’s long-lost son. However, he will have to compete with a few other boys for the title of Prince and the stakes are high. Win and become the crowned Prince, lose and you die. Still, there are many layers to this story and the truth will come out in the end. Everything is not what it may seem and things are about to get messy.