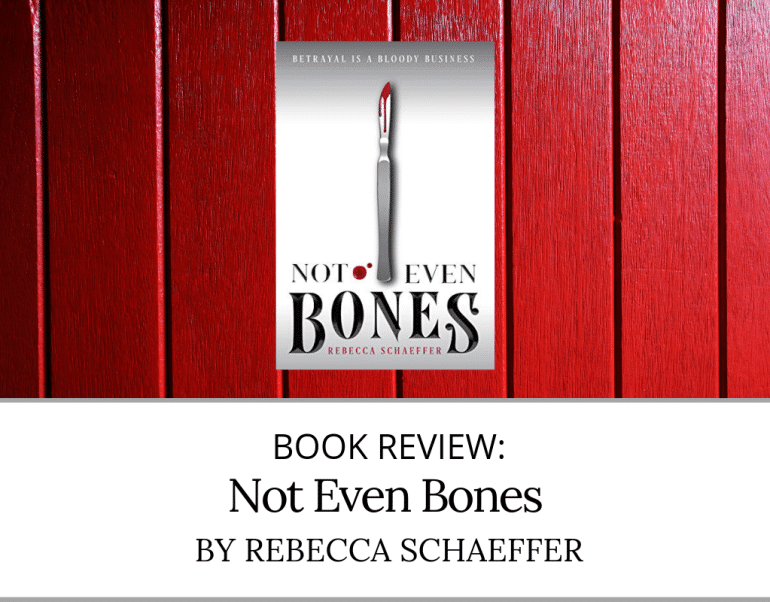 Review of Not Even Bones by Rebecca Schaeffer

Can you imagine someone cutting up a dead body while listening to a Disney playlist?

Well, you don’t need to imagine it; Nita has you covered. She cuts up cadavers while listening to Disney. See, Disney is more than a kid-friendly enterprise. It could also be marketed to surgeons, morticians and even scalpel-happy people (ie. those who get crazy when near a scalpel and a cadaver) as soothing tunes that promote productivity. What more can you ask for?

I can’t say I have ever read a book exactly like Not Even Bones before. I mean, when do you read a book that takes place in the Amazon at a black market? Probably not much. Add in unnaturals (ie, people with supernatural abilities/powers) and you’ve got yourself a fun little mix going on.

For starters, what you’re getting yourself into if you decide to read this is a fun journey following Nita, an unnatural who grew up with parents working in the black market. By the age of 10(?), her mom had her carving up the bodies of unnaturals and harvesting the organs which were to be sold on the black market. To say her childhood was different would be putting it lightly.

Long story short, someone informs a seller at the black market of Nita’s ability to heal herself which leads to her eventual capture and detainment in the Amazon. That is where things get interesting.

More interesting than listening to Disney while cutting up dead people? Maybe.

Honestly, I know Nita is not the best person (morally speaking) out there, but she does have some morals and I amend her for that. Of course, her obsession with cutting up cadavers is a bit unsettling, but, hey, to each their own. Actually, when you think about it, she’s quite similar to Dexter. Her moral compass doesn’t allow her to kill innocents (for the most part) and she’d rather be putting her abilities to good use (like for research) rather than for the black market.

Then there’s also Kovit who is someone you kinda want to meet, yet never want to cross. Otherwise, you may want to be put in the witness protection program to avoid any future encounters with the guy who yields a knife like a surgeon yields a scalpel. Expert precision guys. Expert.

Overall, if you’re in the mood for a unique story with some bangin’ characters that can hold their own against the scary wolves of black martlet street, you should definitely give Not Even Bones by Rebecca Schaeffer a try.

Read Not Even Bones

The Cruel Prince by Holly Black – If you enjoy a protagonist with morally grey areas, you’ll love Jude. She was only 7 when she and her two sisters were taken to be raised in the High Court of Faerie. As Jude becomes intertwined with the palace politics, she begins to realize her own capacity for deception and bloodshed. Add in a spoiled prince who hates humans and you’ve got yourself an intriguing story that will definitely keep your eyes glued to the page. If you have already read The Cruel Prince, try the sequel, The Wicked King.