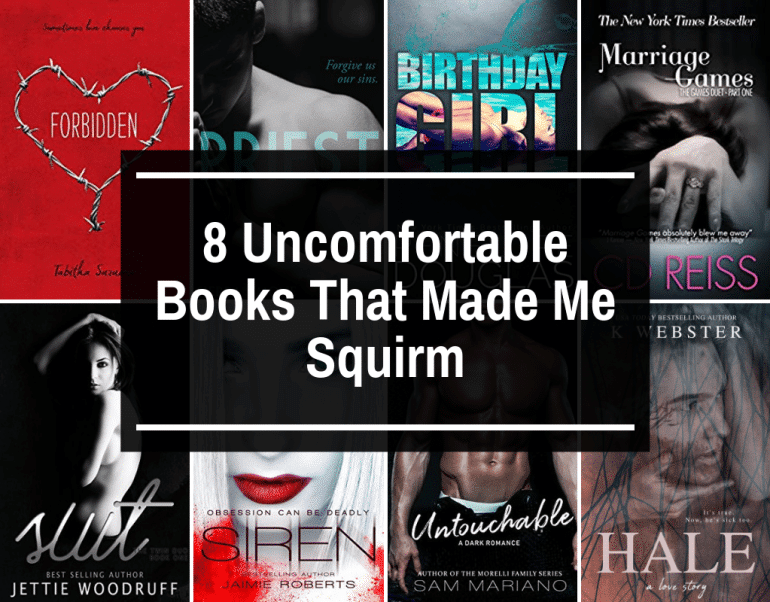 8 Uncomfortable Books That Made Me Squirm

Have you ever read an uncomfortable book that destroyed all your boundaries and crossed every line in the book? If not, I have quite the list for you. These books are all sorts of twisted; from taboo relationships between family members to love stories with an incredibly strange/terrible start, you won’t know how to feel. I didn’t know how to feel half the time.

My advice is to go in to these with an open mind. You might end up surprising yourself. I know I did.

Be prepared for some unthinkable storylines that will literally make you wonder what the author was thinking. Buckle up buttercup. It’s time to get on this crazy train and read some books that push past our comfort zone and the norms of society. Let’s do this!

Forbidden might top the cake for the ‘is this seriously happening?’ storyline. It’s about a brother and sister who are forced to step in for their alcoholic mother to take care of their younger siblings. Because of their home life, Logan and Maya had to grow up fast which created a bond between the two that went way past the normal sibling relationship.

The entire relationship doesn’t happen quickly. It starts with some not so innocent thoughts and glances, touches here and there. That slowly builds and brings them to the point of no return. What’s messed up the most is that Tabitha actually made me root for them. I don’t know what that says about me, but I do know it means Tabitha Suzuma is a damn good author.

I actually shed quite a few tears towards the end, but I won’t say why…you’ll have to find out yourself. That is, if you think you can deal with a romance that basically created the word taboo.

Now, there’s multiple warnings before you even begin the book and there’s a great reason for that. Sam Mariano doesn’t waste time getting into the most uncomfortable scene I have ever read (that I can think of). It was absolutely terrifying what happened only minutes after opening the book.

That being said, tread carefully if you decide to read this because this entire book is so wrong in so many ways (yet I couldn’t stop reading). I even gave it 5 stars. If this relationship was real, I wouldn’t even know what to say except, “you two should not be together and you should probably be in jail or something” but, alas, it is a book . . . all fiction. I had a lot of—not fun per say because that’s not a very accurate word for this story—curiosity going into it.

Also, you need to have an open mind if you do decide to go through with this because it just breaks every norm in the book. There’s lines to how far abuse can go and Carter surpasses those lines with a sociopathic precision. It’s terrible.

So one more time, if you’re not for the dark and depraved type of story with a toxic high school relationship that was built on a foundation of abuse, then you might not want to read this. But if you’re one of the few who’s curious, I’d say try it out and worst comes to worst, you dnf it.

“My only desire in the world is to have my revenge against everyone who hurt me, disbelieved me, and made me into the bad guy. After that, I don’t know… But, right now, nothing in the world matters but my payback. And I’m going to love every sick, twisted minute of it.” ― Jaimie Roberts, Siren

Siren is so messed up. So freaking messed up. It goes far beyond normal messed up and shoots into the realm of the ‘no return type of messed up’. It’s a wtf type of story.

Honestly, I think this is one of the most messed up storylines/characters I have ever had the (mid)fortune of reading. Jaimie Roberts sure knows how to create depraved characters that are literally the stuff of nightmares.

The story focuses on Scarlet, a femme fatale with a desire to exact vengeance on everyone who wronged or failed her growing up and continued to to present day. She has a vendetta and she plans to see it through – no matter the costs.

“Time passes by you like a bullet,” he says, “and fear gives you the excuses you’re craving to not do the things you know you should. Don’t doubt yourself, don’t second-guess, don’t let fear hold you back, don’t be lazy, and don’t base your decisions on how happy it will make others. Just go for it, okay?” ― Penelope Douglas, Birthday Girl

You know that moment when you’re reading a book and a scene comes up that makes you cringe and slam the book down? Or maybe bite your lip and avert your eyes from the page? Well, that’s what this book did to me. There were multiple times where I actually had to put my phone down for a few minutes because of how awkward I felt.

Birthday Girl does feature an age gap which usually does not take me out of comfort zone. In fact, I love me a nice romance with a 19 year age-gap. It’s when you make the relationship between the 19-year-old and her (ex)boyfriend’s father. That’s when things take a sharp left turn and smash into my safety zone.

However, it’s the secrecy that makes everything worse because you know that once her ex-boyfriend (best friend) figures out who she’s with, things will most likely get ugly.

“I was blessed with nice everything. A nice home. A nice car. Beautiful children. A pool right outside my room. The ocean, just a couple-hundred-feet from there. And one fucked up marriage. I was a kept woman. Black and white. Red and Green. I was a glorified whore.” ― Jettie Woodruff, Suit

Suit is one of those books that really threw me through a loop. I had so many conflicting emotions when it came to the hero. Especially since our heroine had amnesia.

Imagine waking up in an unfamiliar hospital room, having no idea who you are and learning that you’re married . . . to a seemingly cruel man and have two daughters. Well, for one, you would probably freak out. I know I would.

What makes this book suitable for this list though is the relationship. It made me so uncomfortable. Paxton, the hero, is the type of character who you love to hate. In the beginning, I hated him. There’s one scene (you’ll know what I’m talking about when you read it) that actually made my jaw drop. I could not believe what was happening. Following that, there were many other surprisingly cruel moments sprinkled throughout the chapters that made me wonder why Paxton was such an ass to Gabriella. You do find out the reasons behind his actions, but they don’t absolve him of his actions – especially one in particular.

“I loved her. Wanted to love her. Needed to love her, and the second she kneeled, she’d be nothing to me.” ― C.D. Reiss, Marriage Games

As of right now, everything I read by C.D. Reiss is captivating. Her prose is amazing and I never find myself rolling my eyes at any lines or cringing from unnecessary cheesiness. An A in my book.

Honestly, if you like your books gritty and real, then this is a perfect match. It’s not instantaneous nor is it unrealistic. Marriage Games is a slow burn romance that is the exact opposite of vanilla. It’s an exploration of bondage, pain, love, redemption and honesty.

The comfort zone may or may not be obliterated during certain scenes, but they all have an important place with Adam and Diana. It’s not meant to be easy or fun, but it sure grips your attention until the wee hours of the night. Seriously, I was up until 4am reading this series. Not one of my best ideas, but I have no self control when it comes to certain stories. It’s a compliment really.

Hale is another sibling romance. However, there is a major difference between this one and the first one I mentioned. For Forbidden, I actually began to feel for them and hoped everything would work out in the end. Hale, on the other hand, was the complete opposite.

Every time a scene with inappropriate touches popped up, I would have to force myself to keep reading. It just felt so incredibly wrong. Especially towards the end, but I won’t say why. However, I read a lot of reviews after finishing it and there were a good number of people who wanted them together. Honestly, I think it depends on the author and their writing style. Webster made it more forbidden in my eyes whereas Suzuma made it tolerable to the point where I supported them.

Hale brings us into the lives of Hudson and Rylie. All Hudson wants to do in life is play ball, graduate college and settle down with his long-term girlfriend. Those dreams go out the window when tragedy strikes and he’s forced to return home to his sister Rylie who has dealt with mental illnesses her entire life. That, my friends, is when it all begins.

Remember to go in with an open mind. It might obliterate all your boundaries, but that’s okay. It happens.

“And was it so wrong to want both? I wanted to lead this church, I wanted to help people find God. But dammit, I wanted Poppy too, and I didn’t think it was fair that I had to choose.” ― Sierra Simone, Priest

Priest is here for one reason: a priest’s vow of celibacy is broken. Alright, that’s not the real reason for why it made this list. I didn’t mind the taboo part of the story. It was the smutty scenes that pushed me out of my comfort zone.

There were times when I would start to itch my neck out of discomfort and awkwardness. Partly because it felt like I was a creeper creeping in on some incredibly intimate moments. It actually made me uncomfortable. In that regard, you may or may not see this as the type of book to take you out of your comfort zone. It really depends on your tolerance level.

However, I must say, there are many smutty scenes throughout this story. I actually remember sighing and shaking my head because it felt like not one chapter went by without something happening.

I hope you found a book that caught your interest. Let me know in the comments what you think of these books if you have already read them. I’d love to hear your opinions on them!

Also, if there are any more uncomfortable books I missed (let’s face it, we know I missed a lot), tell me what they are down below. I welcome all recommendations. The more outrageous, the better! Have fun reading 😊

P.S. I think I might revisit a few of these stories again. Now that they’re floating around my mind, I need to read them again. All the memories are coming back. Although I’ll probably skip out on Birthday Girl, Hale and Priest. I’m still suffering from secondhand embarrassment because of these three devils.