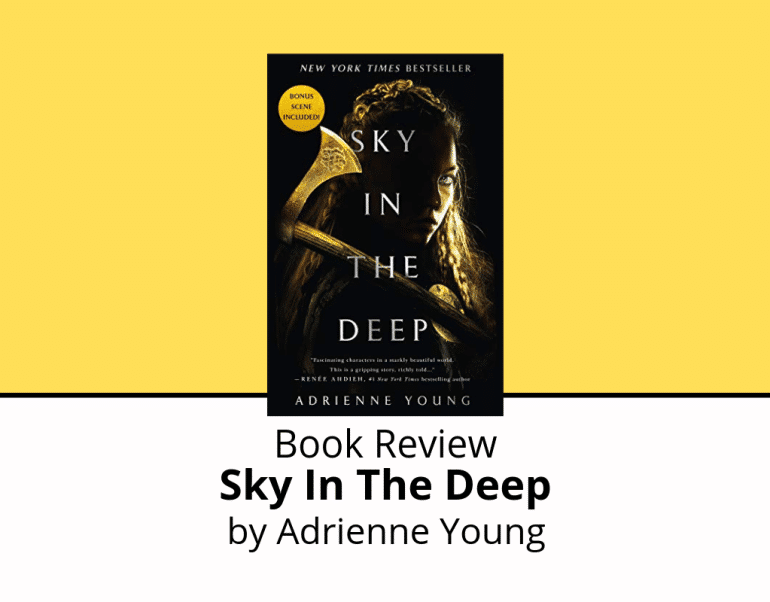 Book Review – Sky in the Deep by Adrienne Young

I wasn’t sure how I’d feel about this book because I’m not always in the right mood for YA fantasy, but I actually have the physical copy, so, I had to like it. I’d be annoyed if I didn’t.

Let me just say that I love the cover. That golden axe is life right there. Makes me wish I had one. And a sword. And that I was a Viking. Uhh, something that will never be.

The fight scenes in this were wild and entertaining and I don’t know how Iri managed to stay alive with his intestines spilling out, but Thora was with him I guess. Or he’s just one stubborn guy who refused to die.

So Sky In The Deep is about two Viking clans, the Aska and the Riki, who have been enemies since the dawn of times (at least, it felt like the dawn of time). They have these yearly fights usually before and after the thaw and it wasn’t until their most recent fight that Eelyn, an Aska warrior (main pov), sees her brother.

A brother who she believed was dead all this time. Fighting. One the wrong side of the battlefield.

She goes after him (probably thinks she’s going a little insane), but in the process ends up a prisoner of the Riki. It is there where most of the story will take place and where you’ll grow to love all the characters.

It isn’t until close to the end that the Hejra become a major problem for both the Aska and the Riki. And a new age begins.

Oh and by the way, Fiske is amazing. When he took care of what’s his name, I was just doing a little dance and smiling like a weirdo.

Overall, I wish there had been an avalanche at some point, but it’s okay. I’ll live.

BUY SKY IN THE DEEP NOW

If you liked Sky In The Deep, check out Children of Blood and Bone by Tomi Adeyemi.