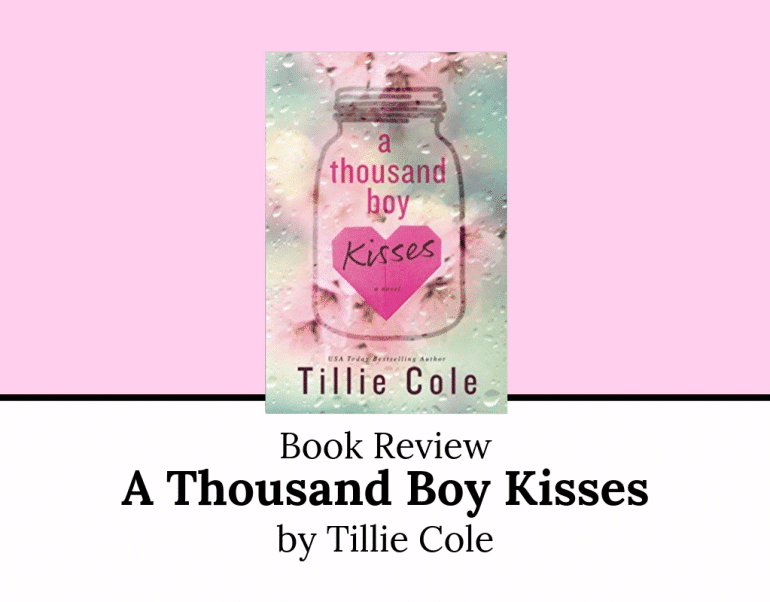 Poppy shook her head sadly. When she looked at me, it was in pity. It made my stomach turn. “That’s not true,” she argued. “Every day is different. The colors, the shades, the impact on your soul.” She sighed and said, “Every day is a gift, Rune. If I’ve learned anything from the last couple of years, it’s that.”

Tillie Cole, you are amazing. The depth of the emotions your writing evokesis beyond me. It’s astounding and magical and it takes me into a world of absolute love. Something that is not a simple feat.

Before A Thousand Boy Kisses, I thought I was a robot, destined to never shed a tear for a character. Then Poppy and Rune entered my life and the box of tissues became my best friend. I must have been 50 pages in when my eyes first teared up. A few paragraphs later, my tear ducts became incredibly leaky and they stayed like that for the majority of the book.

If you need red, puffy eyes for a performance, read this.

I’m at a loss for words. Like always, I opened the book around 9pm and I could not bring myself to put it down until I read every last word. Insomnia hit me after because my mind would not stop thinking about Rune and Poppy. Every facet of my brain was constantly going over everything that happened, every possible alternate scenario, the blossom trees, the quotes, the ending!

Simply put, I was a mess. What am I saying? I am a mess. I’m barely holding it together.

Honestly, a two ton elephant probably took up residence on top of my chest because there were times when this pressure would start to build up from the sheer heaviness of the situations. That lead to my long break from the story (about two minutes) and I would end up rereading that same part that made me take a break. The lines were that powerful. And I’m just that much of a masochist apparently.

So Mamaw’s, Poppy’s grandma, dying wish was for Poppy to have an adventure involving one thousand boy kisses. She gave Poppy a mason jar filled with one thousand paper hearts. Rune ended up stepping up to the plate and gave Poppy her first kiss which lead to many more. Until Rune was forced to return to Norway for two years.

During the majority of those two years, only static came from Poppy’s side. Something we don’t understand until Rune pulls it out of her.

That! That right there made me want to reach into the page and wrangle the everliving life out of the disease has it’s spindly tentacles flowing through her bloodstream and destroying her cells. I wish I could take away all diseases and pound them into the asphalt. But Poppy never let the cancer dictate her life. She made it her wench and lived out her dreams anyway.

This had to be where I left this part of my heart. This would be where I said goodbye to the passion that had kept me strong, that had been my savior in the times I grew lost and alone.

This would be where the notes were left to dance in the air for eternity.

Carnegie Hall was one of the toughest moments for me to get through. Rune watching Poppy play up there, knowing it would be her last performance was heartbreaking. Yet beautiful. Beautiful because she was living out her dream to have that solo she always wanted. I don’t even know how Rune managed that, but it makes me love him even more. His heart beats for Poppy and Poppy only which brings me to what I love most about them.

What I love most is how the endgame never changed. Usually, someone will move on or fake it, yet that never happened. It would always be Rune and Poppy. Their love was of the purest form, something that is quite rare nowadays.

Kiss eight hundred and nineteen was the kiss that changed it all. The kiss that proved that a long-haired brooding boy from Norway and a quirky girl from the Deep South could find a love to rival the greats.

I highly recommend A Thousand Boy Kisses to anyone who wants to release any pent-up tears because they will surely make an appearance one way or another during the course of this story. It’s inevitable. Just like Poppy and Rune. Two puzzle pieces that fit snuggly against one another.

Poppy may have had a short life, but she lived it unapologetically, full of sunshine rays and moonbeams. She had that epic love. The one that lasts for infinity. And it sure did.

I kissed her again, slow and soft. Poppy’s eyes remained closed afterward, then as a blush spread on her beautiful dimpled cheeks, she whispered, “A forever kiss with my Rune … in our blossom grove … when he finally came home.”
She smiled.
I smiled.
Then she added, “… and my heart almost burst.”

Check out Poppy and Ren’s story here. You will not regret it. Although you might depending on your state of mind after…

If you can’t stop thinking about this book and want some more equally tragic stories, then you can find a list of my favorites right here Sad Book That Will Make You Ugly Cry.