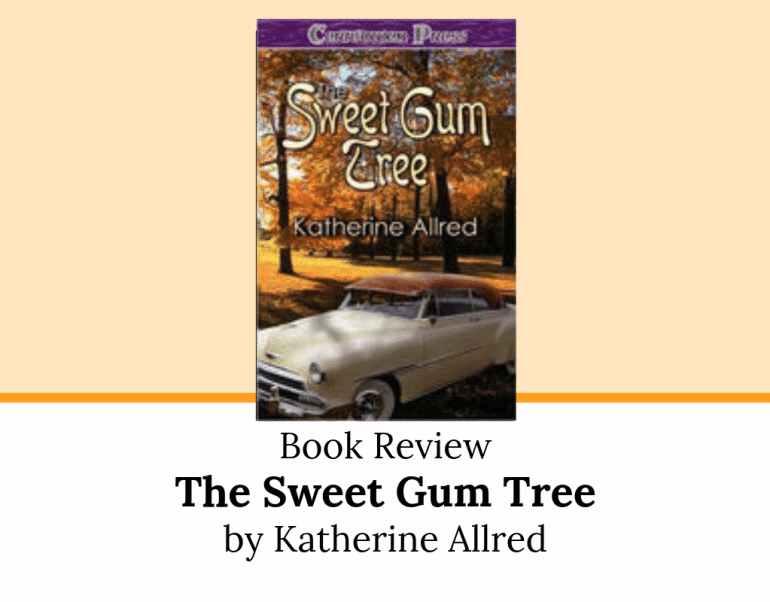 “There are more kinds of hurt than physical ones, hurts that run ever deeper and leave bigger scars, and not even Nick could protect me from himself.”

And to think, many of these problems could have been avoided if there had been better communication and trust…but that’s basically the definition of life. People suck at communicating.

Ughhh! I would love to buy a megaphone and find the highest point so I could look over everyone as I say, “Do yourself a favor and buy The Sweet Gum Tree by Katherine Allred at your local book store or, if you prefer the shipping route, amazon. Go. Go! GOOO!! Just do it already.”

The Sweet Gum Tree is a raw and touching story that follows the lives of Alix and Nick. If you love good ‘ol childhood romances or second chance relationships then this is the book for you. It’ll have you wrapped around it’s beautiful pages by the first chapter.

The story takes place in a small Southern town and starts with Alix, an 8 year-old girl from a respected family, trying to help Nick, the 10 year-old son of an abusive drunk, by treating the wounds on his back. Alix was determined to befriend Nick and when her mind is set, it’s near impossible to change her mind.

His shoulder lifted in a shrug. “I’m Frank Anderson’s son and I live in a junkyard. Who’d want to marry me?”

“I’ll marry you,” I told him decisively. “That way, we can both have kids someday.” He grinned, those dimples emerging in a blaze of glory. “Yeah, you probably would. But I don’t think you should go around telling people you’re going to marry me. They might get the wrong idea.”

Alix had her priories set.

Eventually, Alix’s family decided to let Nick stay with them after seeing what tends to happen when he goes home. As the years went by, friendship turned into something more and nothing could tear them apart. Until Frank Anderson, Nick’s dad, was murdered in his trailer. Soon after that, Nick was taken into custody and, for the next fifteen years, he became a ghost.

The last half of the book is set fifteen years later when Nick returns home, trying everything he can to mend the fractures in his relationship with Alix. Not a simple task after everything she went through in that time span.

“Do you want to know the real reason I came back, Alix?” It was because of you. You’re my roots. Wherever you are would be home to me.”

Nick is seriously one of the sweetest heroes ever and if I could live inside this book, I would be all over him. But I know, nothing could come between those two. In hindsight, things can come between them, but they always manage to find a way to overcome those problems.

Dozens of roadblocks seem to constantly get in their way until an unexpected twist shocks us all. The reason behind Nick’s absence.

Throughout all of this, one thing remains clear; Alix and Nick are the endgame. The true strength of their love isn’t always on the surface, but in the depths of their very being. They were inevitable.

“To my surprise, Nick reached under his shirt and pulled out the half-heart pendant. With his gaze fixed on mine, he slid the chain over my head. “No one should have to go through life with only half a heart,” he whispered.”

Now, for some things I need to get off my mind (which may give spoilers):

Oh and Nick’s dad. Well, read Alix’s eloquent speech. I agree 100%. I hope he rots in hell as well. Also, if I could somehow find my way into the pages of this story, I would castrate him. Goodbye sperm.

But then Daniel would never be. Ugh, I can’t think about this now. On one hand, you wish it never happened, but then Daniel would cease to exist…!?! But you know what? Shooting him was too nice of a death for such a rotten thing. Life in prison however…

What makes no sense is why someone like that scum has years to live while Alix’s daughter Katie only had months because of SIDS. Katie’s unexpected death had me sitting in a state of shock for quite some time after. I’m pretty sure I reread those few paragraphs over a few times to see if I misread, but no luck. But ugh, why?! Why did that have to happen?!?!? I mean, come on. The characters had already gone through so much and then that. I know, it’s life and screwed up things like that happen, but still.

What’s funny is how I say I love books that are real and don’t always have happy, unrealistic endings, but then when it happens, I’m like, “excuse me?!” Not that this didn’t have a happy ending, it did (also, you just knew that because Alix’s mom didn’t get to plan the wedding for Hugh and Alix that there would most certainly be another one. One that deserved everything, aghhh, Nick and Alix for life!!!)

Now, as I lie in our bed making this last entry in my journal, one hand cradles my stomach where our child grows. I know exactly what I’m going to say to him when he comes upstairs to join me.

He always was someone. Because the core of the sweet gum tree never changes.

Like Nick, the deep red wood stays true to its nature. Strong, and steady, and pure.